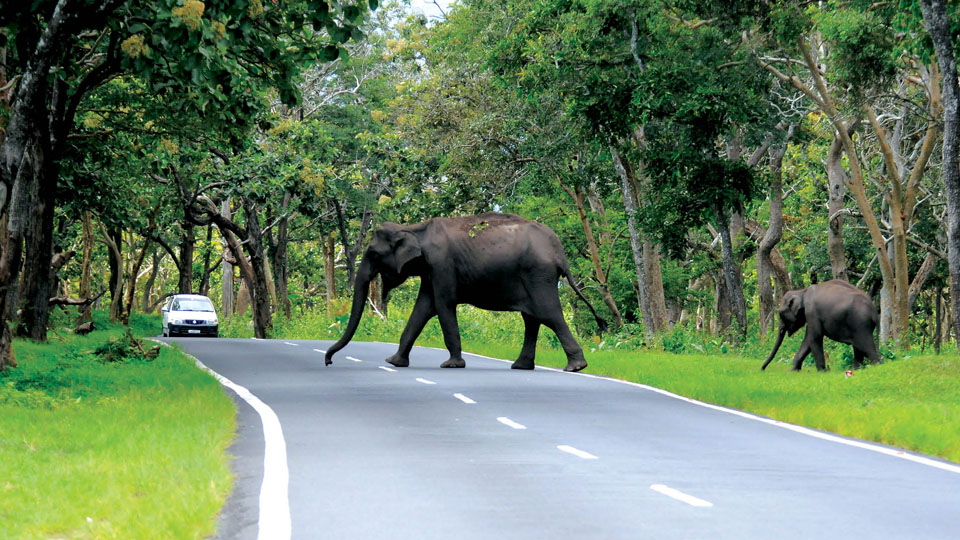 Shell out hefty fines for speeding, stopping inside protected forests

Mysuru:  Following repeated incidents of people travelling on the roads that cut through National Parks and Tiger Reserves disturbing animals and indulging in activities like drinking, smoking, taking photos, shooting videos, playing music in their vehicle’s music system and making loud noise, the Forest Department has decided to crackdown on such activities and impose a hefty fine on violators.

The Department order, a copy of which is available with Star of Mysore states that any delayed or early arrival of the vehicles traversing in the roads of protected areas will attract a fine. Tourists, travellers have been barred from stopping inside the forests, blowing horns, feeding animals, overtaking other vehicles, taking pictures, smoking, consuming alcohol, littering and crossing the speed beyond the 35 kilometres per hour mark. All the above actions will attract a hefty fine in view of animal safety and management of the parks.

It means, if a motorist is looking for a wild time in the forest will have to shell out Rs. 38,000 if he/ she spends 12 hours in the jungle. The time spent in the jungle will be calculated according to the length of the stretch and the legal top speed of 35 kilometres per hour.

Even though vehicles are allowed to pass through these forest areas only between 6am and 6pm under strict vigilance, vehicles are often seen stopping at regular intervals inside the forest for various purposes.

Speaking to Star of Mysore, Ambadi Madhav said that all vehicles that pass through forest areas are registered and tracked through ‘Gasthu’ — an app based on GPS technology. “While allowing vehicles inside the forest, our staff manning the gates at the check posts will inform inmates of vehicles on various restrictions.

They will be told not to cross the 35 kilometre per hour mark that has been arrived at after considering the safety of wildlife. These rules will prevent vehicles from knocking down animals also,” he said.

Department officials say that some motorists go under the trees for a smoke or to consume liquor. Others stop at regular intervals to feed or tease animals and some tourists stop their vehicles to click photographs and shoot videos of wildlife and landscape.

“In doing so, the tourists litter and disturb the wildlife too. Also, they end up jeopardising their lives as wild animals could attack them.

There have been instances when vehicles or passengers are chased by animals,” Ambadi Madhav said.

“We have received many such photographs and videos on social media and trend is rampant. We want to put a full stop to this. If the tourists are interested in seeing the wildlife in action they can come and take the safari trips so that they can shoot as many photos and videos as they like,” he added.

* Rules will apply on roads that cut through Bandipur Tiger Reserve and Nagarahole National Park.

Forest Department
Sandesh Swamy, Prof. Rangappa to file papers tomorrow
Siddharamaiah has his way, will contest from Badami too