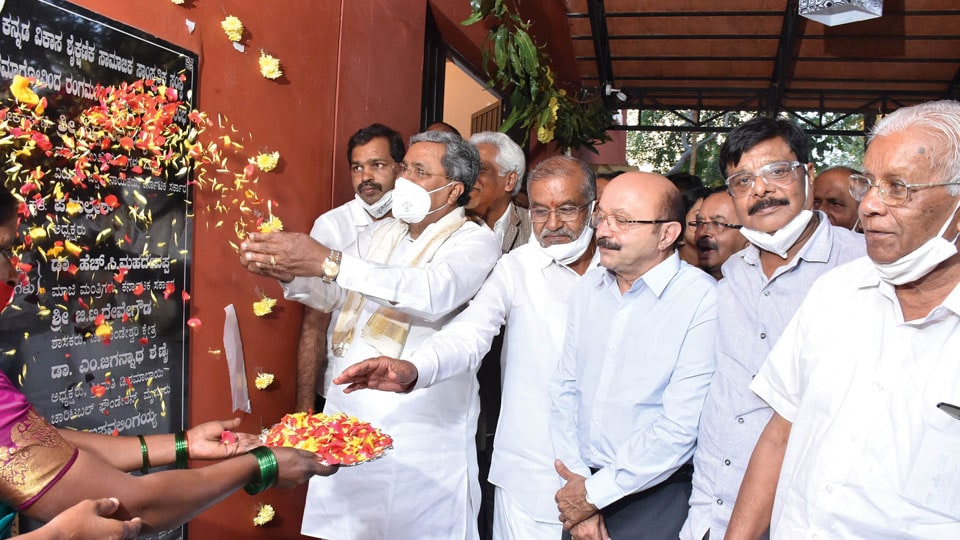 Mysore/Mysuru: Maintaining that Mysuru, which is known as the Cultural Capital of the State, lacked Rangamandiras, Opposition Leader and former CM Siddharamaiah said that Mysuru essentially needed a full-fledged Rangamandira and RamaGovinda Rangamandira has provided one.

Pointing out that everything needs to be done to save our theatre art which depicts reality, Siddharamaiah opined that theatre is filled with real and lively arts. Asserting that those who have a theatrical background are the real artistes, he said that it is important to note that many theatre actors have went on to become cinema stars.

Noting that although Town Hall in city underwent renovation several times, it had failed to get back its originality, he said that Kalamandira on Hunsur Road is a huge one and staging of plays here may not attract a full house. As such, the newly built RamaGovinda Rangamandira, which is equipped with all needed facilities, is an ideal place for theatre activities, he said.

Regretting that love for English has even spread to villages, Siddu said that common perception is that children who study only in English medium will become intelligent. Noting that there are many scholars and great personalities who have studied in Kannada medium, he said that it is important to get primary education in one’s mother tongue and added that he and his children studied in Kannada medium till tenth standard.

Continuing, he said that as Chief Minister earlier, he had released Rs.1 crore to Nrupathunga Kannada School and also had ordered sanction of another Rs. 1 crore. But this could not be realised as the 2018 Assembly polls came in the way, he said and  urged the present dispensation to release Rs. 1crore sanctioned by him.

Former Minister and senior Congress leader Dr. H.C. Mahadevappa said that there is no discrimination of any sort for arts. Observing that the theatre should create awareness among the public at a time when caste, community and creed affiliations are getting deep-rooted, he said that the theatre has the strength to transform the society. He recalled that Kannada theatre icons such as Gubbi Veeranna, Subbaiah Naidu and Master Hirannaiah had created public awareness on social issues through the theatre.

National School of Drama (NSD) Bengaluru Director and former Rangayana Mysuru Director C. Basavalingaiah urged the Government to build Rangamandiras in all districts. Any country that promotes theatre will have cultural richness, he added.

Industrialist M. Gopinath Shenoy, in his address, said that art-lovers are key for the growth of artistes and Rangamandiras. Noting that theatre-lovers should watch plays by buying tickets, he said that this will help both the artistes and the organisers. He wished all success for the newly built Rangamandira.

The event also saw friends-turned-foes Siddharamaiah and Chamundeshwari JD(S) MLA G.T. Devegowda (GTD) coming together after a gap of nearly two years. Siddharamaiah , who contested the 2018 Assembly polls as a Congress candidate while being the Chief Minister, had lost to GTD by a huge margin in a bitterly fought election and since then, they reportedly never saw eye to eye. However, the two got a chance to share the dais in the poll campaign for 2019 LS elections when Congress and JD(S), which then ran a Collation Govt. in the State, had forged an alliance. Yesterday’s event provided a chance for the two to share stage again, after a gap of nearly two years.