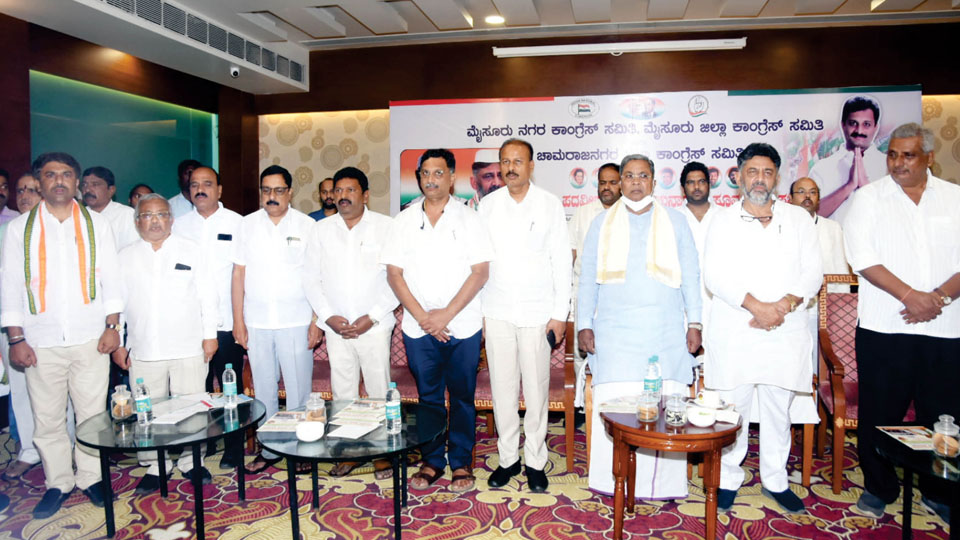 Mysore/Mysuru: Accusing the BJP of rampant corruption and maladministration, Opposition Leader and former Chief Minister Siddharamaiah asked the Congress workers to work for the ouster of the State BJP Government, by ensuring the victory of the Congress candidates in the Legislative Council polls from Graduates and Teachers Constituencies.

Asserting that the Congress is the only party that can throw out the BJP Government, the Opposition Leader alleged that SC/ST leaders in the BJP were silent even though the Government had cut short SC/ST development funds by Rs.12,000 crore.

Stating that Prime Minister Modi was silent on the charges made by Karnataka Contractors Association which had alleged a 40 percent cut in contracts and tenders, Siddharamaiah said that the educated voters must think whether the nation would survive if the corrupt BJP Government continues in power.

Questioning the Government  on the developmental and welfare measures taken by it, he claimed that the BJP was only dividing the society on caste and communal lines, which is detrimental to the very fabric of democracy.

Re-asserting that the Congress was the only party that cares for all sections of the society, Siddharamaiah asked the party workers to campaign hard  in an organised manner and ensure the victory of the Congress candidate Madhu G. Madegowda in the South Graduates Constituency.

Highlighting the achievements of late Congress leader G. Madegowda, he said that Madhu was now taking forward the educational institutions and other service organisations founded by his late father.