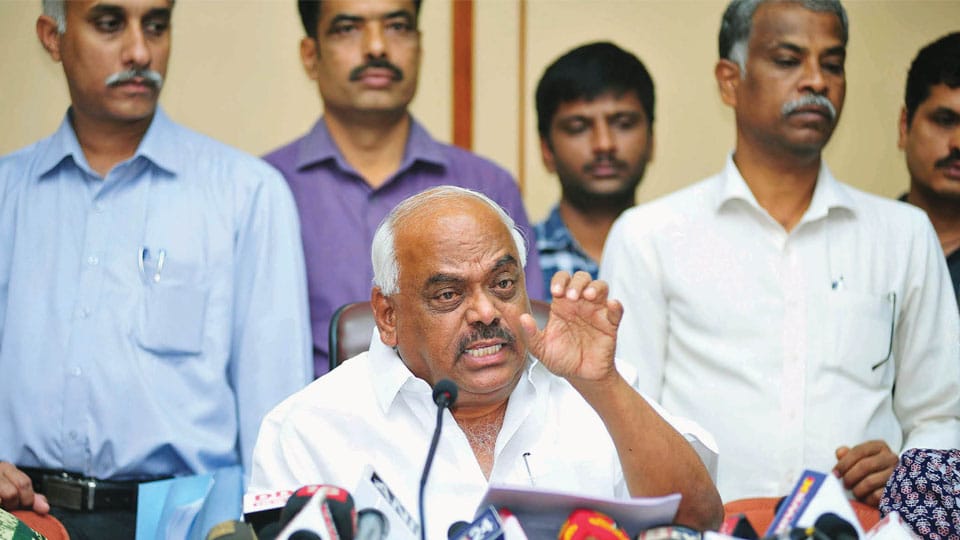 Bengaluru: Assembly Speaker K.R. Ramesh Kumar this morning disqualified 14 rebel Congress MLAs under the Anti-Defection Law, just a day before the newly formed BJP Government will face a Trust Vote in the Assembly.

On Thursday, two days after the collapse of the Congress-Janata Dal-Secular (JD-S) alliance Government in the State, the Speaker had disqualified three rebel MLAs — Ramesh Jarkiholi, Mahesh Kumthahalli and R. Shankar — in a move that heightened the suspense over the exercise of Government formation. All the lawmakers have been disqualified from the 15th Assembly till the end of its term, which calls for by-elections in all 16 constituencies. Today’s disqualifications bring down the strength of the 224-member House to 207 (excluding the lone nominated member who does not have rights to vote), and the majority mark slides to 104. The BJP currently has 105 members and claims the support of Independent MLA H. Nagesh.

Speaker Ramesh Kumar, speaking at a press conference in Bengaluru this morning, said the way he was being pressured by colleagues because of his post had “pushed me into a sea of depression.” Kumar added that he had promised that he would take a decision “in a couple of days” and was honouring the deadline. This is not drama or manipulation… I have been behaving in a manner in which a gentleman has to behave,” he said.

He said that on being advised by the Chief Minister he had directed the Secretariat to convene a session on Monday at 11 am. “Therefore, I have to make my pronouncement on the remaining complaints pending before the Speaker.”

Giving a reason behind calling the press conference on a Sunday, Ramesh Kumar said, “To allow motion of confidence vote to be taken up for consideration and after that the Finance Bill. Hence, my staff has been in office both on Saturday and Sunday. I, therefore, have to make my pronouncements today.”

The Speaker said that he is yet to take a call on the fate of BSP MLA N. Mahesh after the party sought his expulsion because he abstained from the Trust Vote on July 23. “My office is in receipt of a letter from the BSP seeking expulsion of its MLA (N. Mahesh). I have not taken a call on that after the hearing,” Kumar said.

Responding to a question on the BJP planning to seek his disqualification, Kumar said: “Let it come. Why should I be worried?” Party sources had said on Saturday that the BJP was contemplating bringing a no-confidence motion against the Speaker if he does not voluntarily vacate the post.

The message has been discreetly conveyed to Kumar to give up the post, which is conventionally held by a member from the ruling party, the sources said, ahead of Chief Minister B.S. Yediyurappa moving the confidence motion in the Assembly on Monday to prove his majority.

“We will move the no-confidence motion against the Speaker if he himself does not resign,” a senior state BJP leader said. “Our first agenda is to win the confidence motion and get the Finance Bill passed on Monday. We will wait and see whether the Speaker steps down on his own,” he added.

The BJP leader sought to know how there could be a Speaker from the Opposition party. “Once we win the confidence of the House, we will go ahead with moving no-confidence motion,” he said.

Moments after the Speaker disqualified the MLAs, the BJP condemned his decision. A.S. Patil Nadahalli, BJP leader, said, “Speaker’s decision is illegal and undemocratic. The MLAs met him and gave the resignation. Their signatures were voluntary and genuine. This is a dark day for Karnataka politics.”