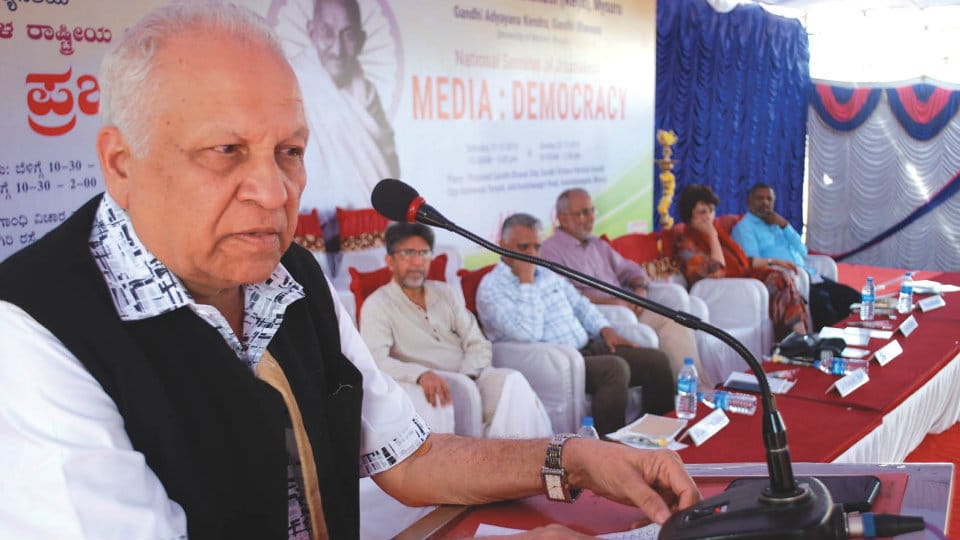 Speakers express concern over threat to Democracy at Journalism Seminar

Mysuru: Maintaining that equality and secular principles form the basic idea of the country, Senior Journalist and former Outlook Editor Krishnaprasad opined that the country is now facing the threat to democracy from within.

Noting that three out of the four pillars of democracy have already been destroyed, Krishnaprasad wondered whether  the media, which is considered as the fourth pillar can save democracy. Pointing out that India is a multi-religion and multi-cultural country, he questioned whether the media can prevent the country from becoming a uni-cultural country.

Claiming that the country is now reeling under an undeclared emergency, Krishnaprasad said that the media had failed in questioning the Government.

Observing that the media has been unable to save democratic principles in the present circumstances, he said that 67 percent of the country’s resources is owned by just 1 percent of people, which speaks about the ever growing gap between the rich and the poor.

Asserting that the society too should speak about injustice and discrimination, he urged the media not to spread superstitions among the people.

Alleging that the electronic media is engaged in disturbing harmony, he said that the media cannot tell the truth when they are under threat.

Claiming that the media has lost the power to question the Government, Krishnaprasad regretted that the media was not questioning about the wealth and alleged illegal  deals of the son of Union Home Minister Amit Shah.

Replying to a question on whether there was secularism in 1949 and whether Article 370 should have continued even 70 years after independence, the senior journalist claimed that several journalists in Srinagar region were engaged in masonry for their livelihood.

Asserting that he was not here to give a certificate to the Congress Party administration, he maintained that he was only speaking about the flawed laws that were being introduced by the current Government at the Centre.

‘Media is a Mayhem’

Rajya Sabha Member and Senior Journalist Kumar Ketkar, who spoke on the topic ‘Media is a mayhem’, alleged that intelligence agencies and certain people’s representatives are taking control of the media. As such, TV news viewers too are not getting the true facts and a true picture of the country.

He further said that he would thank all those who read newspapers and shun news channels.

Senior Journalist Ravindra Bhat, who spoke on ‘Media Transformation’ said that the people nowadays are only ‘seeing’ newspapers instead of reading them. Arguing that the people must understand that social media is more dangerous than the print media, he said that the media which is considered as a watchdog, will not bark or bite if one gets familiar with it.

Replying to a question, he said that the editorials in newspapers will not be against public opinion.

Writer Lakshmish Tolpady of Puttur, who spoke on ‘Religion and Propaganda’ said that a human being cannot achieve big in life without discovering the truth. He further said that exploring the truth holds key for sustenance of our multi-cultural society.

‘How free is the Media’

Seema Mustafa, Editor, ‘The Citizen’ of New Delhi, who spoke on the topic ‘How free is the Media’, opined that journalists today seem to be more interested in promoting themselves rather than portraying the burning problems that the country is facing. Stating that journalists must realise that they are not celebrities, she argued that journalists must all the more be concerned about maintaining the health of the society.

The valedictory was held on Sunday, during which Senior Activist Dr. G. Ramakrishna took a dig at Prime Minister Narendra Modi for speaking about a five-trillion economy and asked him whether he knew how many zeros are there in a trillion.

Alleging that Modi was creating a mania among the people by frequently speaking of a five-trillion economy, he alleged that the media too is engaged in glorifying this. Accusing the media of failing to correctly analyse even simple situations, he urged the media to be more responsible and paint a true picture of the situations.

Senior Journalist Ravi Hegde, who spoke on the topic ‘Learn to Lead Life amidst Breaking News’, opined that the term ‘Breaking News’ itself had become a big joke.

Maintaining that there was a time when news were heard with interest and respect, he said that the trend of ‘Breaking News’ has turned commercial and also makes the people feel circumspect about the certainty of the news itself. Regretting the rising trend of spreading ‘Fake News’, Hegde said that the fierce competition among TV channels for TRP rating was the main reason behind the rush for ‘Breaking News’ of TV channels.

Another Senior Journalist D. Umapathy said that the news anchors of most of the TV channels seem to be speaking in favour of a party. Alleging that a majority of the media had become a pet dog of the ruling class, he opined that the media instead of interacting with the salaried class, should question the leaders or the capitalists who earn from the toil of the working class, who sweat it out for making a living.

A. Hariprasad, a Senior TV Presenter, recalled that late Chief Minister D. Devaraj Urs had declined the party ticket to an industrialist for contesting the polls, citing that politics was not for industrialists. Maintaining that anchors of some channels were expressing their views impartially, he said that as for himself, he often speaks as an opposition party on many issues.

Former Minister Dr. H.C. Mahadevappa, who is also the Hon. Vice-President of Gandhi Vichara Parishat, presided over the valedictory function. UoM Registrar Prof. R. Shivappa and others were present.

Democracy Journalism University Of Mysore
‘End of Decade Sale’ at Big Bazaar till Jan.1, 2020
‘Guru Namana’ and ‘Noopurotsava’ in city from tomorrow