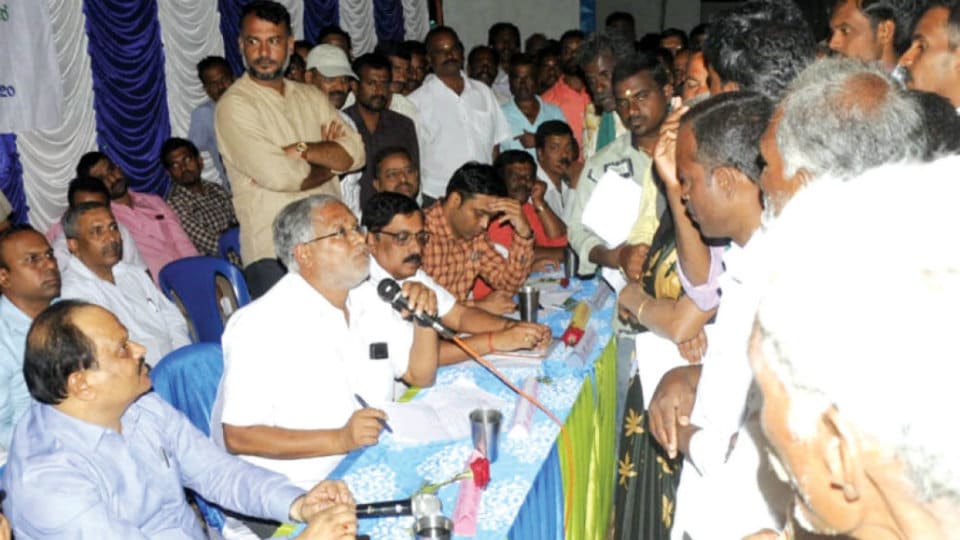 Suresh Kumar arrived at Pachchedoddi village at 7 pm and interacted with students and parents. Pachchedoddi village is over 15 kilometres from Hanur town in Chamarajanagar and the only link road to this village is not asphalted. It is a village on the fringes of forest and there are over 60 houses. Over 200 people live in the village.

While Pachchedoddi village has no basic facilities and children have to walk miles to reach their School. The village only has a Primary School and students have to depend on Ajjipura, Kanchalli and Ramapura for HighSchool education. Those villagers who have two-wheelers drop their children to Schools but most of the children walk amidst thick jungles constantly amidst fear of wild animals, especially elephant herds that roam on the fringes.

This issue was brought to the notice of the Minister who assured that a vehicle will be provided for School children to reach the School from their village. The Minister was told that over 18 children, studying in High School, were forced to walk through the forest daily to reach Ajjipura, Kanchalli and Ramapura. Moved by their plight, Suresh Kumar said that he will get the vehicle sanctioned soon.

The interaction between parents, students and villagers was held for the Minister to understand the education scenario in border districts at a time when the influence of other State languages is high on Kannada language students who study in border Schools. Chamarajanagar shares border with Tamil Nadu and Kerala where Tamil and Malayalam are the respective State languages.

Owing to the Minister’s stay, the School was painted and swept and for a change, toilets were cleaned. The official machinery had camped in the village to ensure that the Minister did not face any inconvenience.

Wild animal attacks are frequent phenomena in the village and villagers are not cultivating crops for the fear of destruction by elephants. Most of the villagers depend on domesticated animals including bovines, poultry and goat-sheep rearing. Some earn a living through manual labour. But as the forest area has been declared protected wildlife sanctuary, villagers are not allowed to graze animals inside the forest. Cases are booked against villagers by Forest Department for entering the forests.

The Minister directed Chamarajanagar Deputy Commissioner Dr. M.R. Ravi to prepare a report on the problems faced by the villagers living in 11 villages in the border district. Villagers complained that they have to struggle to get their share of free rice under Anna Bhagya Scheme as they have to visit Basavanadoddi, around 6 km away.

A road was approved earlier but the Forest Department did not permit road works, the villagers complained. Male Mahadeshwara Hills Deputy Conservator of Forest V. Yedukondalu clarified that there was no provision for asphalting roads as the village is under the Wildlife Sanctuary and is an eco-sensitive zone. Reacting to this, DC Dr. Ravi said that a Mobile Fair Price Shop will be sent to the villages for 2 days a month.

READ ALSO  Tips on How to Write an Admission Essay Perfectly

Commenting on his overnight stay, Suresh Kumar said that the stay in Schools helped him interact with children and their parents in a relaxed atmosphere and helped him know the ground realities. Some students complained that they find cooked insects and worms in their mid-day meals. Suresh Kumar asked the School authorities to check, clean and wash the rice, vegetables and grains thoroughly before cooking to ensure that clean food is served to children.