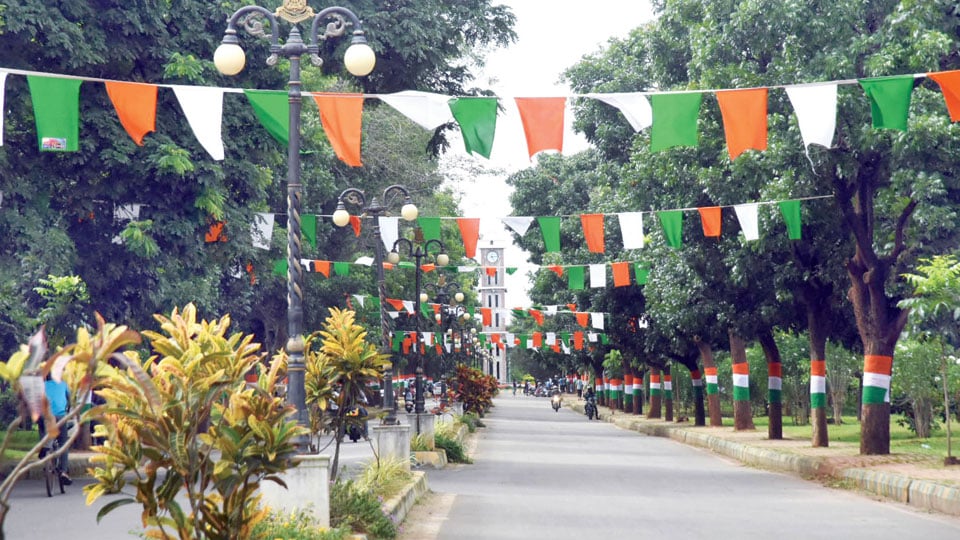 Mysore/Mysuru: The University of Mysore (UoM), the seat of learning for tens and thousands of youths, is dominated by the Indian Tricolour. Every nook and corner of the vast and green campus is filled with flags, symbols, buntings and banners depicting the colour of the National Flag — saffron, white and green.

The Indian National Flag is a symbol of national pride for the entire nation. The decoration is inspiring many Mysureans to hoist the Flag at their home to make the ‘Har Ghar Tiranga’, a grand success.

Notably, the flags, posters and colours have been put up across the campus days before the 75th Independence Day as if to remind the youths, students, teachers, research scholars and the general public who visit the campus on a day-to-day basis about the significance of the Day.

In fact, the decoration is not at all jarring and is pleasing to the eyes. Every tree on the green campus is sporting the Tricolour. The decorations start from the three Arch Gates of the University, Clock Tower, roads, roadsides, kerbs and statues of Kuvempu, Mahatma Gandhi, Dr. B.R. Ambedkar have also been decorated.

Hundreds of people who come to the campus every day are made to have a special feeling about the freedom movement and are made to think of their sacrifices. Educational blocks like humanities, science and commerce divisions, library, and the famed round canteen — all are decorated and exude the spirit of freedom.

“The campus has been filled with Tricolour and National Flag symbols to double the pride of freedom among post-graduate students, teaching and non-teaching faculty and research scholars. This is all the more relevant as we are celebrating the 75th Independence year. After Aug. 13, the National Flag will be unfurled at all the Departments of Studies and on Aug. 15, there are plans to gather over 25,000 students to celebrate  Azadi Ka Amrit Mahotsav,” UoM Vice-Chancellor Prof. G. Hemantha Kumar told Star of Mysore.