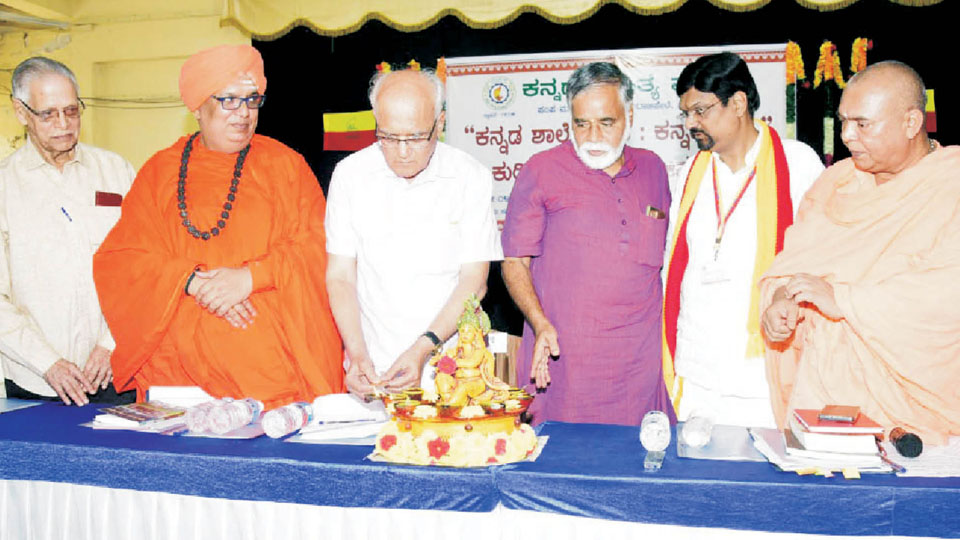 Bengaluru: Primary and Secondary Education Minister B.C. Nagesh said that English will be taught from Primary classes in the proposed ‘Government Model Schools’, a new initiative announced in the recently tabled State Budget.

He was speaking after inaugurating the Round Table Conference organised by Kannada Sahitya Parishat at its premises in Chamarajpet here recently.

Continuing, the Minister maintained that several Kannada reforms taken up by successive Governments had suffered setbacks due to multiple Court orders.

Noting that the Government is deeply concerned about the dwindling number of students in Kannada Schools, he said that the recent experiment of Karnataka Public Schools has been a success because English Medium of instruction was introduced. We need to work together to stem this tide, Nagesh observed.

Dr. Bhyrappa said that the aid/scholarship was first conceptualised when D.V. Sadananda Gowda was the Chief Minister, but was never implemented after he demitted office.

Now that there is a BJP Government again, the scheme is worth reviving, he contended. Arguing that students need to be given an option to write exams in the language of their choice, he maintained that this kind of experimentation could break the exclusivity of the medium of instruction.

Kannada Sahitya Parishat President Dr. Mahesh Joshi said that the revival of Kannada Schools was crucial to Kannada-Kannadiga-Karnataka. He demanded that the State Government bring in urgent reforms such as asking all Government staff to send their wards to Kannada Schools, all exams in the State to be conducted in Kannada alone and an option to write all National exams in Kannada.