Home » News » Stage King: For 35 years he has pitched shamiyanas and dais for Dasara events 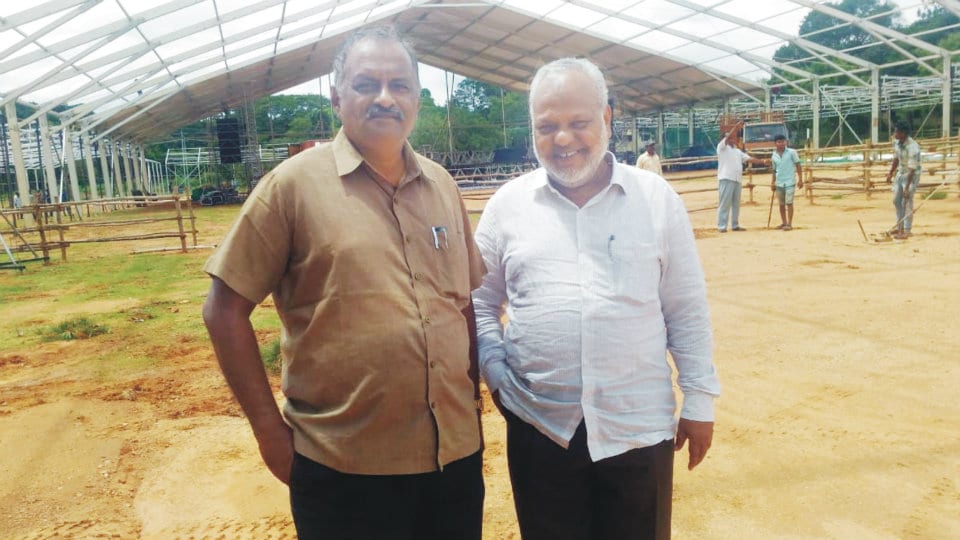 Stage King: For 35 years he has pitched shamiyanas and dais for Dasara events

Mysuru: It is Dasara season and a season of events that pulls thousands of crowds to various venues in Mysuru. Accommodating the crowds safely amidst rain so that they can enjoy wholesome entertainment is usually a headache for any organiser.

To make this task a cakewalk is K.M. Shariff, who single-handedly handles the responsibility of putting up pandals and shamiyanas with modern amenities. He has been doing this since the last 35 years. Dasara organisers and political parties have so much of confidence in him that they blindly trust his efficiency and task-delivery capacity.

Shariff, a resident of Udayagiri, owns Shariff Furniture at Agrahara Circle and has years of experience in setting the stage for any election rally, VVIP visit and all other programmes that take place under the shelter he provides to his customers. He is the only one in Mysuru who provides shelter to many mega events in Mysuru and event organisers vouch by his name.

Also, during Dasara, he erects Welcome Arches at all the entrances to Mysuru city — Bengaluru-Nilgiri Road, Hunsur Road, H.D. Kote Road, Nanjangud Road and T. Narasipur Road. He does this work in partnership with M.B. Gopalakrishna. Both of them have been together in business since the last 25 years.

Shariff starts his annual Dasara works 50 days before inauguration where over 200 workers and 6 to 8 vehicles begin the transportation, repairs, stitching and decorating works. Finer fabrics need maintenance and they need to be cleaned for it to retain sheen and freshness. Among the events Shariff has handled, the biggest is Yuva Dasara at Maharaja’s College Grounds.

For Yuva Dasara, a giant Mantapa (East-West 400 feet, South-North 200 feet) is set up and a stage of 40×80 feet is erected. Also, a pandal that can accommodate 11,000 people is erected and cushion seats with armrest is provided for VVIPs. The entire set up is waterproof and does not fall even if there is medium wind pressure.

Wind is a threat

“Rain is not a threat at all but wind is. Before the shamiyana is erected and the stage is set up, I go to a mosque and pray for the smooth conduct of the event. I had put up the pandal covering one lakh square feet area for Prime Minister Narendra Modi’s rally at Maharaja’s College Grounds last year with 250 ft X 400 ft dais which had LED screens, air coolers, VVIP chairs, sofa sets, arm and armless plastic chairs along with barricades,” Shariff told Star of Mysore.

Though the Government payment for his services comes late, Shariff is undeterred. “Sometimes it gets delayed by more than three months. But the show must go on. In fact, at some of the events more than 200 to 300 chairs are either broken or damaged as people climb over them instead of sitting. In fact, I have not received payment for the services rendered during 2016 and 2017 Dasara. I am sure that the payment will come. But cannot deny salaries to my employees and workers,” Shariff says.

Lone in the business

Earlier, many people like Shakur Brothers, Jani Sait, Abidz and Tiruvanni Somanna used to provide shamiyanas but they have slowly wound up the businesses and have taken up different trades. Shariff was one business partner among them and he has, over the years, improvised and sustained the business and now he is dominating. The biggest risk, however, is finding workers to climb 25 to 30 feet to put up the pandal.

“In the last 35 years I have seen many changes and I have also moved along with the times when it comes to providing materials for events. Now I put up German Tents built on German technology. I took up this profession from my father who had an old furniture shop. But over the years I have become whatever I am today because of this profession and I am very happy,” he explains.

The positive side of the business is, of course, the personal rapport he has gained with the top leaders of the city, official machinery and also State and national leaders from all political parties.

Shariff’s biggest customer is the JSS Mahavidyapeetha for whom he has been pitching pandals since decades. He has inventory worth Rs. 3 crore and his massive godown in Nazarbad stocks everything. “JSS has provided me 7-acre land behind Gopalagowda Hospital free of cost and I am indebted to them,” he says.

“I have an emotional connect with Mysuru Dasara and I am continuing the profession with passion. So far the business is running good and I have been able to build a reputation and a name. I get ready with my services even if there is a short notice from organisers,” Shariff signs off.