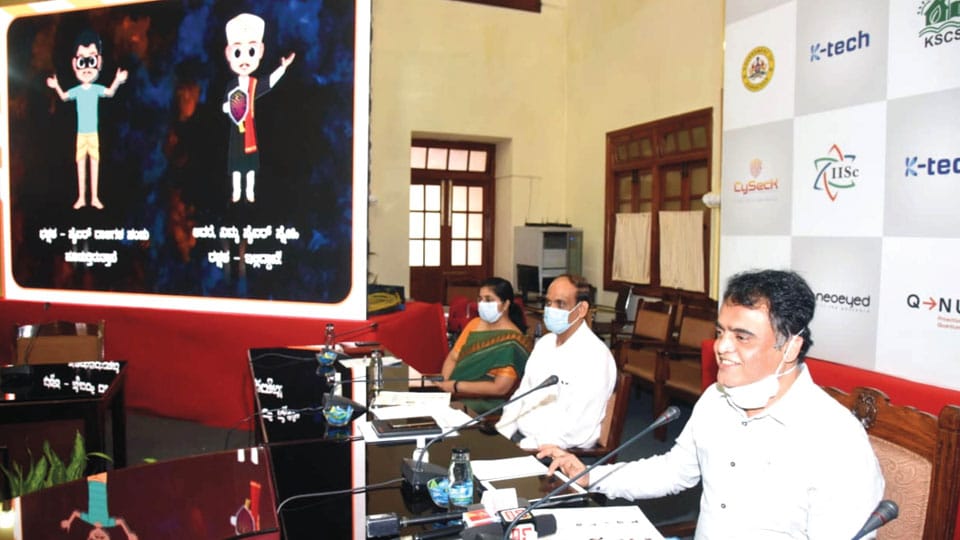 State Government to come out with Cyber Security Policy soon

Bengaluru: The State Government will soon come up with a Cyber Security Policy as the digital transaction is expanding its scope on each passing day and cyber security becoming a subject of paramount importance, said Deputy Chief Minister Dr. C.N. Ashwathnarayan, who is also the Minister for Information Technology and Biotechnology, Science and Technology (IT, BT and S&T).

He was speaking after unveiling the mascots of Cyber Security on Monday at Vidhana Soudha, as part of the inauguration of celebrating October as Cyber Security Month which is being observed by the State for the first time.

Dr. Ashwathnarayan said Cyber Security is gaining increased focus in the Government in view of the rapid adoption of IT (Information Technology) solutions for delivering public services. This has benefits as well as cyber risks. The new Cyber Security Policy will be formulated to address needs of the citizens, industry, students as well as the State Government, he added.

The Deputy Chief Minister said  as per an FBI report of US, the number of complaints from cyber attacks has increased up to 4,000 per day, a 400 per cent increase compared to before the pandemic.  Apart from phishing attacks, there is a surge in malware attacks and ransomware attacks. Cyber criminals have launched thousands of “fraud portals” in the guise of collecting donation to the cause of Coronavirus, he said.

According to a report by the FBI, India stands third in the world among the top 20 countries in internet-related crimes. Apart from phishing attacks, defacement of websites and DDoS attacks have become prominent threats. The Indian Computer Emergency Response Team (CERT-In) has also put out an advisory that explained about Coronavirus pandemic based cyber-attacks. The majority of attacks are done via phishing emails, malicious advertisements on websites, and third-party apps and programmes. Attacks on computers, routers, and unprotected home networks in the present work from home situation are also on the rise, he said.

Bengaluru houses India’s IT hub and naturally will also be a favourite target of cyber criminals. Hence, it is important for Govt. organisations to become more cyber aware. Cyber aware employees are the best defense against cyber risks in any organisation. With the objective of sensitising citizens and employees of an organisation to cyber risks, October is observed globally as a Cyber Security Awareness Month. In accordance with that, the Government of Karnataka is also observing the same, Dr. Ashwathnarayan explained.

National Cyber Security Co-ordinator Lt. Gen. (Dr.) Rajesh Pant joined the event through an online platform as a keynote speaker. He spoke of the importance of cyber security and the threats to India’s critical IT infrastructure from varied sources.

Prof. Narahari, Chairperson, EECS Division, IISc, and Convener of the Technical Committee of CySecK, elaborated on the need for cyber security awareness for the Government staff including bureaucrats and State Government employees.

As part of this month-long programme, sessions for senior Government officials on cyber risks are scheduled and will be attended by IAS, IPS, IFS, KAS officers, Deputy Commissioners and CEOs of Zilla Panchayats.

CySecK is Karnataka Government’s CoE (Centre of Excellence) in Cyber Security, housed in the IISc., (Indian Institute of Science) campus, with IISc., as the anchor institute and KSCST (Karnataka State Council for Science and Technology) as the implementation agency. CySecK was setup by KITS (Karnataka Innovation and Technology Society) of the Department of IT, BT, and S&T.