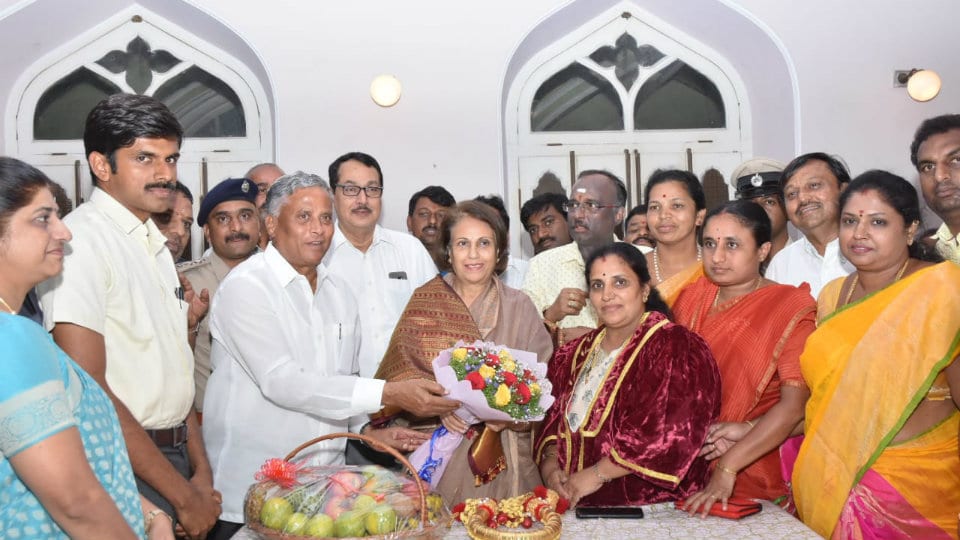 Mysuru:  Official Dasara invitations were extended to acclaimed novelist and Saraswathi Samman Awardee Dr. S.L. Bhyrappa who will inaugurate the festivities atop the Chamundi Hill on Sept. 29 and member of erstwhile royal family Pramoda Devi Wadiyar.

The invitations were extended on behalf of the State Government, the official hosts of ‘Nada Habba’ last evening by Mysuru District Minister V. Somanna and a team of elected representatives and officials. They were invited at their homes traditionally by offering shawls, garlands,  flower bouquets and fruit baskets.

Somanna said that he had the responsibility of inviting Dr. Bhyrappa and Pramoda Devi Wadiyar entrusted by Chief Minister B.S. Yediyurappa and he was happy to extend the invitation. Both the dignitaries have accepted the invitations and have conveyed a message that they would extend their full co-operation to the festivities.

Recalling the contributions to the Mysuru region by the Wadiyars, the Minister said that the region had prospered during Wadiyar’s regime and people will remember their sacrifices for many years to come. Seconding Somanna, Pramoda Devi Wadiyar too said that she will extend her co-operation this year like she has been doing in the previous years. Scion of royal family Yaduveer Krishnadatta Chamaraja Wadiyar will be present during Pushparchane to the Jumboo Savari by the Chief Minister, she added.

Reacting to the invitation, Dr. S.L. Bhyrappa said that he was indeed happy to be invited to inaugurate Dasara. “Both the State Government and the Centre do not have the ego and the State authorities have extended a very courteous invitation to me and they have showered their love on a writer. Accepting their love, I have agreed to inaugurate Dasara and I have postponed my England tour,” the littérateur said.

True to his nature, Bhyrappa also said that praising the State and Centre does not mean that he supports all that is done or propagated by the Governments. “When Bharat Ratna was conferred on Sir M. Visvesvaraya, the then Prime Minister Jawaharlal Nehru had personally written to Visvesvaraya. Then, Sir M.V. had written to Nehru where he had told him that honouring him with Bharat Ratna will not make him (Visvesvaraya) support all that Nehru Government does,” Bhyrappa remarked, leaving the rest for the audience to think and assimilate.