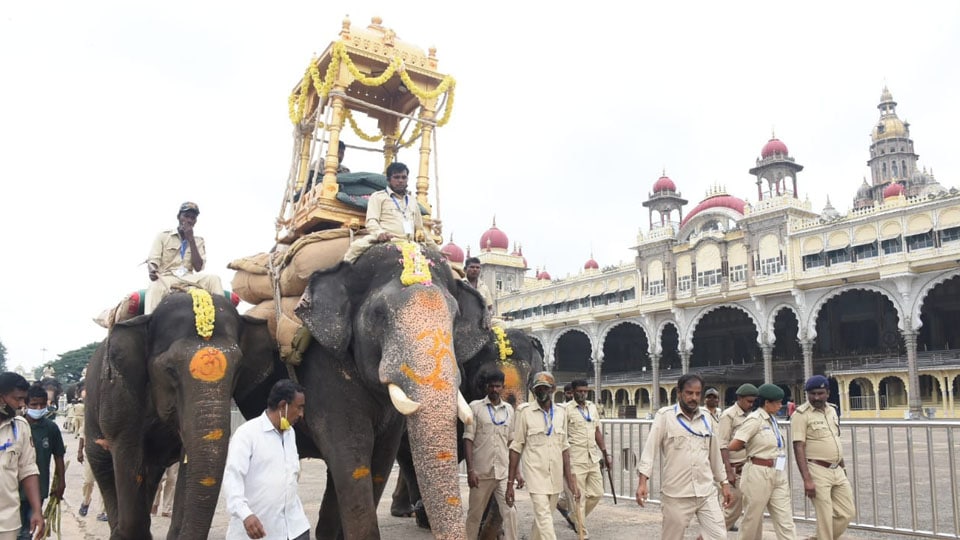 State says NO to Dasara crowds

Mysore/Mysuru: With just two days to go for the inauguration of 412th Nada Habba Dasara festivities, the State Government has released fresh guidelines for the opening ceremony, Navarathri and Vijayadashami celebrations, restricting the number of attendees.

The guidelines have turned down the requests made by the Tourism and Hospitality stakeholders of Mysuru to increase the number of crowds at least to accommodate over 2,000 tourists instead of politicians and their followers inside the Mysore Palace for the Jumboo Savari. They had argued that increased tourist participation would mean additional income for the COVID-battered sector.

In an order issued this morning, Chief Secretary P. Ravikumar has called for strict implementation of rules and regulations to prevent the third wave of the pandemic. As per the order, not more than 500 people will be allowed to watch the Jumboo Savari within the Palace fortress.

During the Dasara inauguration atop Chamundi Hill where CM Basavaraj Bommai and State Guest S.M. Krishna would do the honours, only 100 people are permitted. This 100 includes the CM, dignitaries, officials and media personnel. Public has been banned from attending the programme and arrangements have been made for virtual watch of the programmes.

For the eight-day daily cultural programmes that will be performed at Mysore Palace premises, the entries will be limited to 500. From Oct. 7 to 15, the Police have been directed to strictly enforce rules on all the roads and destinations and ensure that crowds will not gather at select points. Mask-wearing is mandatory and the Police will have the powers to initiate measures to book the violators.

On Oct. 15 for Vijayadashami, only 500 people will be allowed inside the Mysore Palace for the grand view of caparisoned elephants and the Golden Howdah procession led by Captain Abhimanyu.

The focus of the festival will be virtual viewing and all the participants of the festivities including officers, staff, cultural troupes, security forces and the media have to produce RT-PCR negative report not less than 72-hours and a single dose vaccination certificate. Inside the Palace too, COVID-appropriate behaviour will have to be adhered to, the guidelines stated.

Meanwhile, the City Police have enforced a house-to-house beat system to strengthen the policing to identify mischief-mongers during the Dasara festival. “Each Police Station has been assigned beats that will be 24X7 and the respective Inspectors and ACPs have been made responsible. Information will flow into the City Police Commissioner’s Office and extensive cross-verifications are being done there,” Deputy Commissioner of Police Pradeep Gunti told Star of Mysore.

The house-to-house beat system is to identify new entrants to the city who have taken apartments and houses on rent. “We are seeking the co-operation of people to be watchful about new shops opening in their neighbourhood, new people roaming about in areas, vacant houses, houses that have been locked since a long time and we are cross-verifying the details with landlords and apartment owners,” the DCP said.

As the tourist flow is high during Dasara, the Police have asked the hotel owners, serviced apartments, lodges and home-stays, resorts and club houses to rent out their premises to the guests only after a thorough verification and after seeking their authentic identification documents, he added.