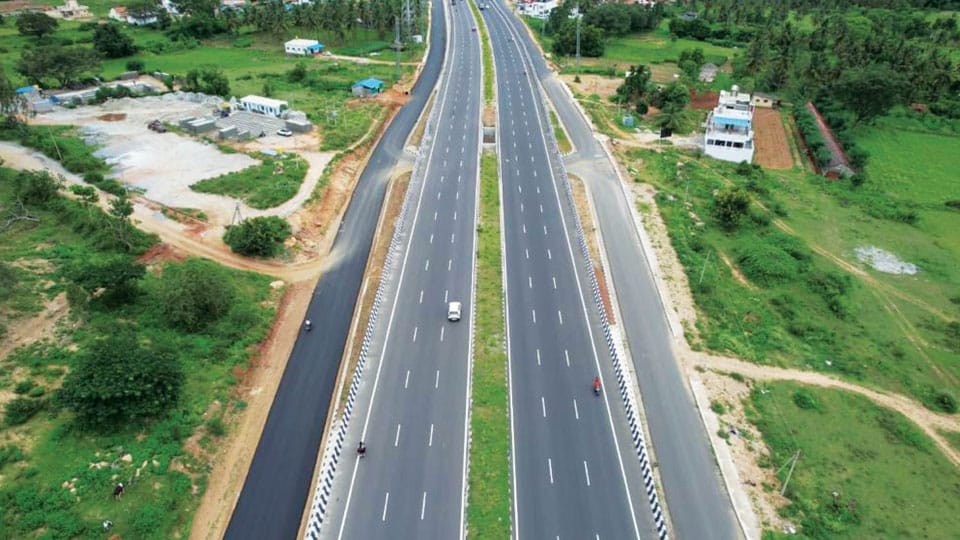 Bengaluru: The recent rain and the lake breach along the work-in-progress 10-lane Mysuru-Bengaluru Economic Corridor (Expressway) has made the authorities realise that there is still plenty of work to be done on the road front to control the flow of water.

The authorities have conceded that it will take a minimum of six months to complete the road and to be opened for traffic. This being the case, the ambitious Rs. 8,172 crore Economic Corridor will surely miss the Dasara deadline. A fresh deadline of December this year or January 2023 has been set now.

Incessant rains have delayed the project and the contractors are unable to complete the works. Officials said that on Aug. 15, the road between Christ College on the outskirts of Bengaluru and Nidaghatta will be opened for traffic on one side.

This is only to facilitate the movement of the Independence Day procession that is being planned by the project contractors and also associations and organisations. The work on service roads by the side of the Expressway between Bengaluru and Nidaghatta will be completed in two months.

Project Director B.T. Sridhar of the National Highways Authority of India (NHAI) has written to the State Government expressing his inability to complete the project by this Dasara. He has sought four to five months to complete the project and has mentioned in his letter that the contractor has been asked to speed up the pending works.

Sridhar has mentioned that land acquisition has to be done at a couple of places for the rainwater to flow smoothly so that it does not cover the road. Once the land is acquired, it will be ensured that water flows down the Highway without any obstruction. These works will be designed in such a way that the water does not enter the Highway, its service roads and tunnels, Sridhar stated.

A team from New Delhi will inspect the Expressway to certify its safety and suggest corrective measures. The corridor has nine major bridges, 44 minor bridges and four rail overbridges. While the works on the bypasses are almost over, works are on to complete the flyovers, he stated.

8 COMMENTS ON THIS POST To “Status of 10-lane Mysuru-Bengaluru Highway: Six more months to prevent floodwater flow above road”