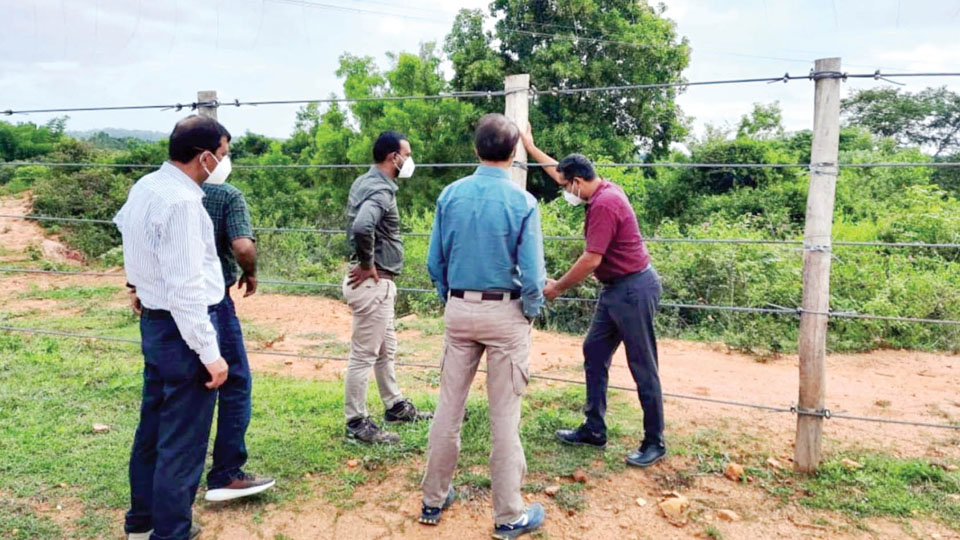 The initiative of erecting steel wire fences on forest boundaries in Karnataka to prevent elephants and other wild animals from straying into farmlands has taken off in Nagarahole National Park and this is the first-of-its kind initiative in Karnataka.

Steel wire fencing is a safe method adopted in Tamil Nadu to prevent elephants from entering villages. The process of laying the 4-km rope barrier is going on at Veeranahosahalli Range. The concrete pillars have been made to hold the poles and at present, curing works are on, Assistant Conservator of Forests A.V. Satish told Star of Mysore.

Earlier, the Forest Department has tried many ways to prevent animals from straying into human habitats — from solar fencing to rail fences, and even tried wired fencing on forest boundaries. However, none of them were found to be effective and elephants continued to raid the forests.

Apart from the boundaries and fringes of the Nagarahole Tiger Reserve, the menace is rampant in Kodagu, Hassan and Chikkamagalur. There are many instances where pachyderms have crossed the sturdy railway line barricade and have managed to learn how to sneak in and out of the forests within the available space between the tracks.

In Tamil Nadu, villagers living in Thali and Jawalagiri forests in Hosur Forest Division have heaved a sigh of relief after the Forest Department erected a 12-km-long steel wire fence to prevent wild elephants entering residential areas and fields. The fence has been set up in a region from where wild elephants enter villages to raid farmlands every year.

Villagers grow ragi and a variety of vegetables, which get destroyed once elephants raid their farmlands. This resulted in huge loss of income for the farmers. Initially, 2-km fencing was laid and after it proved a success, a 10-km fence was erected. After the steel wire fence was laid, its strength was tested using kumki elephants. The results showed that the fence withstood the pressure and it was not damaged. The wire has been tested and the size has been standardised.

In all, for one kilometre there will be 5 ‘anchor posts’ and 55 ‘intermediary posts’. In addition, to improve sturdiness, eucalyptus poles are laid at an interval of two metres. The wires are so strong that it bends if elephants push but will not break. Also, one kilometre of laying such wires will cost only Rs. 50 lakh but the railway barricade costs Rs. 1.5 crore for the same length.

Even if the wires loosen over time, they can be tightened and if the elephants have to be driven out of human habitats back to forests, the wires can be loosened. This flexible facility is absent in the railway barricades.

“This steel wire fencing is an effective means of controlling wild elephants. We have sent a proposal to the Government to erect such a fence at the Bheemanakatte-Allur area that borders Nagarahole National Park.”