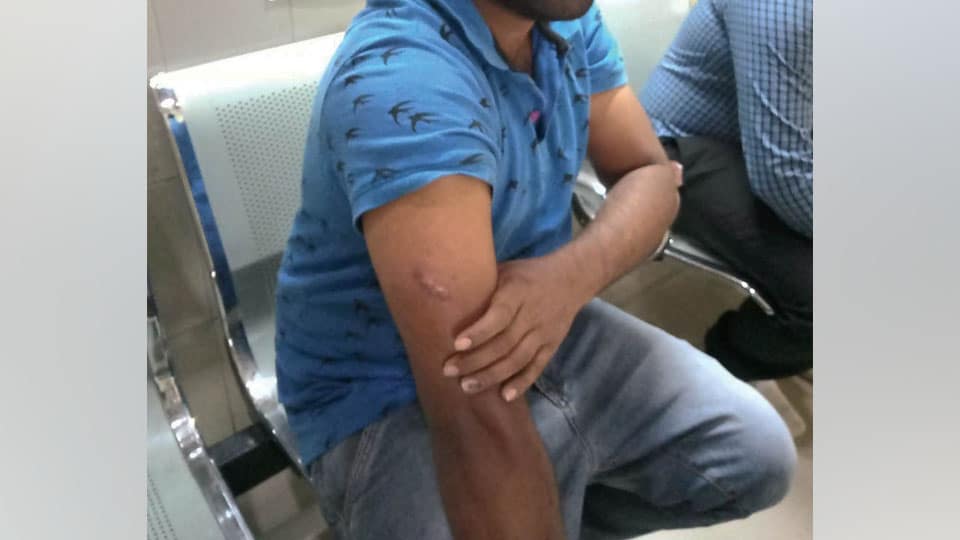 Mysuru: A stray horse bit a youth who was riding his bike near Mysuru Law Court Complex on Thursday evening. The youth has been identified as 31-year-old Harish, a Marketing Executive and a resident of K.G. Koppal.

The incident occurred on Sept.6 when Harish was riding his bike near the Court Complex. Harish came across two stray horses fighting with each other. One of Harish’s friends was moving ahead on his bike.

The horses were knocking their heads together and were moving menacingly from one side of the road to other, and there was no way Harish could continue his bike ride though his friend managed to cross the fighting horses.

Harish slowed down his vehicle to let one of the horses pass by. But the horse suddenly turned and lunged at Harish and bit his right arm. In excruciating pain, Harish managed to wriggle out his arm from the jaws of the animal and jumped to safety. Fortunately, the horse did not attack him again.

Harish’s friend, however, did not notice the animal attacking his friend and had moved ahead. He later turned his vehicle to see what happened to Harish. Seeing an injured friend, he took him to the Primary Health Centre at Krishnamurthypuram where the doctors administered Anti-rabies vaccine, Tetanus injection and Painkillers and was referred to K.R. Hospital.

Speaking to Star of Mysore, Veterinarian at Mysuru City Corporation Dr. Suresh said that, it is rare for horses to bite a human being. Usually horses either bite or kick when threatened. This particular horse might have panicked because of traffic.

“We have given Harish Anti-rabies vaccine as it is the only treatment available for animal bites. This particular horse might not have rabies as rabid horses die within 72 hours of contracting the disease,” he said.

It may be recalled here that last November, two stray horses ran amok on Chamaraja Double Road and Devaraja Urs Road forcing people to run for cover. Many commuters abandoned their vehicles and entered shops to take shelter.

When asked about the stray horse menace, Dr. Suresh said that owners abandon them after use. “We don’t have a separate shelter for stray horses. If the owner of the horse is detected, we levy fine of Rs.500 per day. But it is very difficult to identify the owners,” he added.