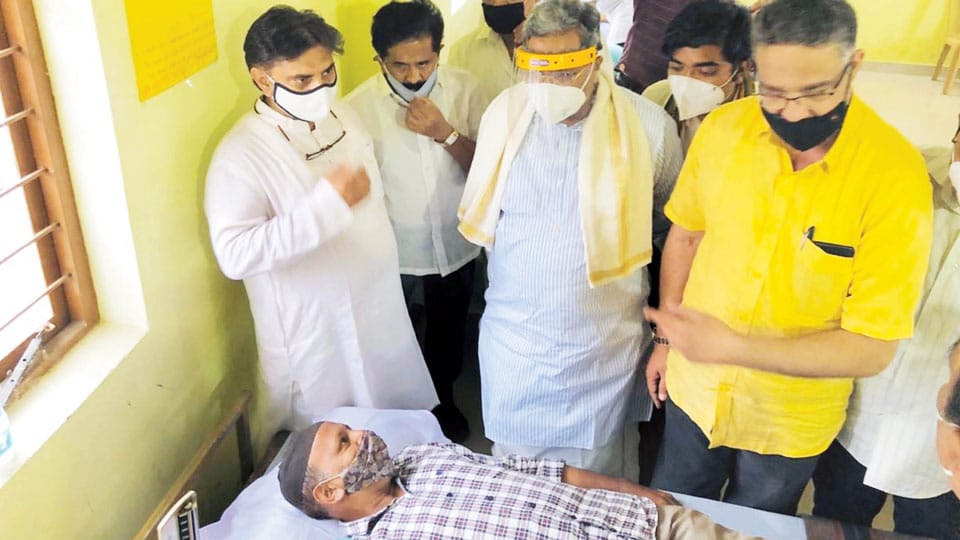 Mysore/Mysuru: Leader of Opposition in the State Legislative Assembly Siddharamaiah has flayed the State Government for its failure to tackle Covid-19 situation resulting in the explosion of positive cases across the State.

Siddharamaiah said the District Hospital was converted into COVID Hospital over six months ago but basic facilities and medical equipment have not been provided from time to time.

The Coronavirus epidemic would have been well within the check had the Central Government clamped a scientific lockdown instead of general lockdown in March this year. Both the State and Union Governments have totally failed to manage the situation, Siddharamaiah added.

He said the ventilators were not available for Corona positive patients with breathing problems. But, the State Government was claiming to have spent crores of rupees on purchase of COVID-19 equipment. Negligence of the Ministers concerned has denied treatment to the common people.

“I also tested positive for Corona recently and recovered after treatment. I have understood the importance of wearing face mask, shield, using the sanitiser and maintaining a safe distance to keep the pandemic away. Now at least the Government must wake up and strengthen all State and District Hospitals where hundreds of patients are being treated,” Siddharamaiah, who is also the former Chief Minister, said.

As many as 40 Corona recovered patients donated plasma at the camp.