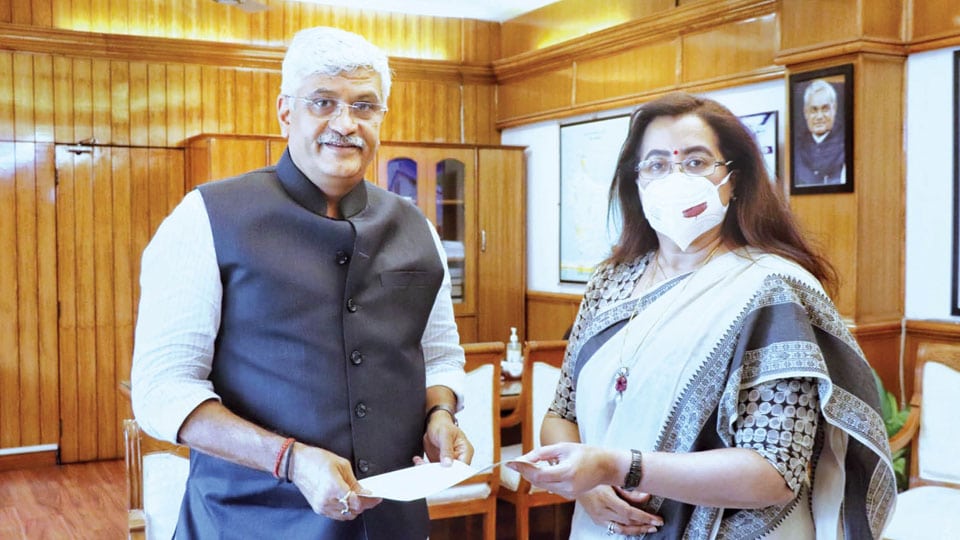 Mysore/Mysuru: Determined to take the stone mining and blasting issue around the Krishna Raja Sagar (KRS) Dam to a logical end, Mandya MP Sumalatha Ambarish called upon Jal Shakti Minister Gajendra Singh Shekhawat in New Delhi yesterday to urge the Centre to put a full stop to the rampant mining activity and also order a CBI probe into illegal mining in her constituency.

Submitting a memorandum to the Minister and interacting with him for some time, Sumalatha said that many farmers have threatened to commit suicide due to threats from elected representatives and public officials if they complain against rampant illegal mining near KRS Dam, the safety of which is threatened by blasting activities.

“The recent collapse of a wall near the Dam is an indication of the threat to the safety of the structure and it is necessary for the Central Government to step in and constitute a high-level committee to probe the incident. Due to illegal mining, the Government too is losing huge revenue that used to come from mining companies,” she told the Minister.

In her memorandum, the Mandya MP has stated that illegal mining activity was being carried out with the complicity of elected representatives and officials. “Despite the Supreme Court making observations regarding structural damage to KRS Dam in view of using heavy explosives and blasting within a radius of 20 kilometres of the Dam, rampant and uninterrupted illegal mining involving heavy explosives and blasting, is being carried out,” she noted.

She drew the attention of the Union Minister to the constant tremors experienced by the people and farmers within 20 km radius of the Dam and also the resultant air and water pollution. “Environmental hazards include breathing difficulties and repeated miscarriages,” she said.

Sumalatha added that though damages have occurred to houses and the blasts resulting in house collapses, the officers from the Mines and Geology Department have not taken any action as they are being threatened by a section of elected representatives.

In her meeting with Union Mines Minister Pralhad Joshi, she highlighted that due to illegal activities, the Government was losing huge revenue and demanded a probe into illegal mining. “Royalty and penalty to the District Mineral Foundation (DMF) for the minerals that are being unearthed illegally is evaded and the evasion is more than Rs. 2,000 crore,” she added.

“Defaulters are being protected by political leaders,” she said and demanded a scientific and accurate drone survey to unearth illegal mining and its impact to the Dam and also the people living in the vicinity. She also urged Joshi to direct the authorities to do an audit of royalty collection, outstanding taxes, penalties and other dues from the mining industry in Mandya.