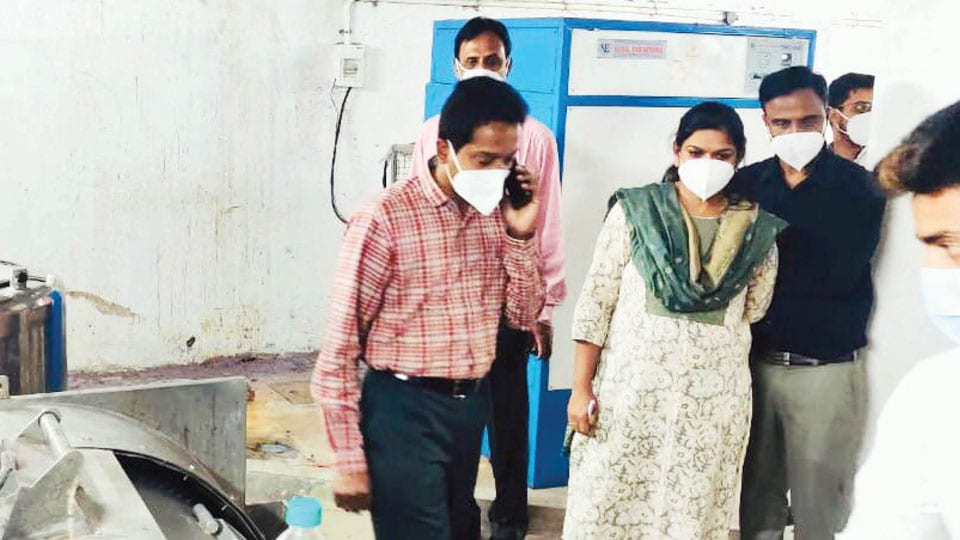 Mysore/Mysuru: Mysuru yesterday reported a single-day spike with 219 new cases of COVID-19 and two new COVID clusters. Clusters have been reported for the first time in the last one-and-a-half years after the initial one that was reported from Nanjangud.

On Thursday, only 65 cases were reported and cases have now spiked to 219. The District Administration swung into action soon after the steep spike and Deputy Commissioner (DC) Dr. Bagadi Gautham visited the KSOU COVID Care Centre (CCC) near Mandakalli on Mysuru-Nanjangud Road yesterday and inspected the facilities.

The administration is preparing to reopen the CCC in case positives increase further. As of now, the infected are being treated at the District Hospital and Private Hospitals and also many are in home isolation. The Health Department is ready to open all the facilities like in the second wave and they can be stepped up within two to three days.

The clusters have been identified at BCM Hostel, Chamanahalli, T. Narasipur with eight cases and another at RBI Colony in Mysuru city that has seven cases. Health Department officials have taken preventive measures and have stepped up testing of all the primary and secondary contacts of the positive persons in the clusters.

District Health Officer (DHO) Dr. K.H. Prasad told Star of Mysore that the sudden spike has been reported as people were casual during their New Year trips, parties and other large-scale events that were held in Mysuru during Christmas and New Year. “We are ready with a plan of action and will implement the same but people must exercise restraint,” he said.

Yesterday, Mysuru city recorded 163 positive cases out of the total 219 new cases. 29 have been reported from T. Narasipur, 11 from K.R. Nagar taluk, 9 from Nanjangud, 5 from Mysuru taluk, two from Periyapatna and zero cases from H.D. Kote, Hunsur, Sargur and Saligrama.

As per the data released by the District Administration, 12 children aged 17 and below have tested positive in Mysuru city and of them, two are below 5 years , four are in the 6-10 age group and six are in the age group of 11-17.

Five persons between the age group of 0 to 17 tested positive on Thursday while the same number rose to 23 yesterday. The total active cases reached 484 yesterday and 77 have been isolated in dedicated COVID-19 Government Hospitals and 32 in private hospitals. Over 375 have been isolated at home. However, no deaths were reported yesterday.

A total of 7,444 samples were tested out of which 219 came out positive and on Thursday, 5,700 samples were tested where 65 reported positive. DC Dr. Bagadi Gautham said that the KSOU Covid Care Centre can accommodate 600 patients and in the first stage, 200 beds will be made available. Beds will be increased in case of necessity and in case, the KSOU centre is full, another COVID Care Centre will be opened with 700 beds, he added. In Taluks too, the Administration is ready to open COVID Care Centres.