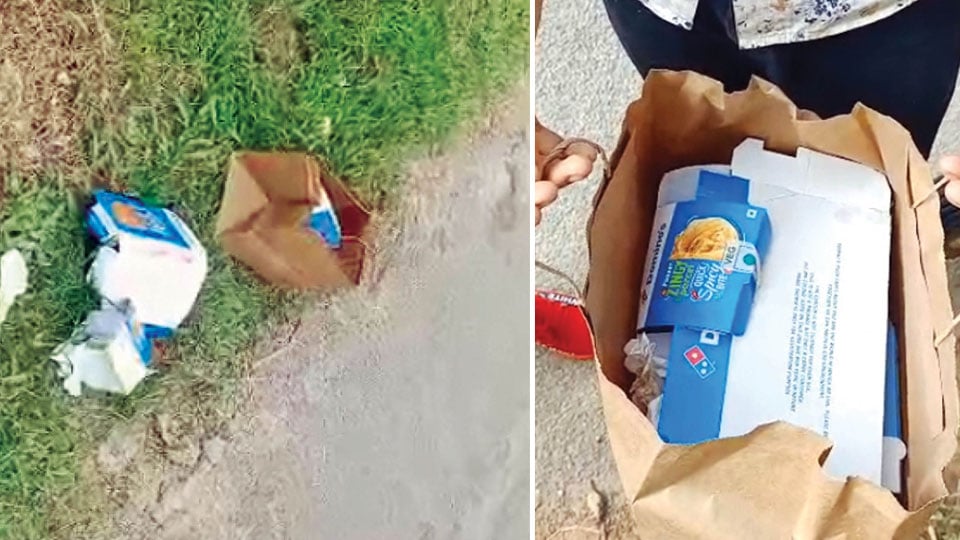 Madikeri: A vigilant Kodava has made the entire Kodagu District proud by making a group of tourists from Mysuru, who had thrown garbage on roadside, to come back and pick it up. His appeal through social media not only got a tremendous response from people but also sent a message loud and clear that  ‘You cannot take everyone, everyplace and everything for granted.’

The ‘hero’ of this incident is Madetira Thimmaiah, a former President of Kadagadaalu Gram Panchayat in Madikeri taluk. On Friday, Thimmaiah while travelling in his four-wheeler saw the empty Pizza packets and the paper bag thrown on roadside near Kodagu Vidyalaya junction. He stopped his vehicle, checked the bag and found the bill which had the mobile number of the customer.

Without wasting time, he video-recorded the strewn garbage on his mobile phone and put it on the social media platform. When he called the mobile number mentioned in the bill, he was told that it was Chirag of Mysuru who along with his friends came to Madikeri.

Chirag reportedly told Thimmaiah that he had bought the pizza from a Pizza Shop in Madikeri, and had disposed the trash on roadside. When Thimmaiah asked Chirag to come and pick up the garbage, the latter told him that he was almost near Mysuru and it would take another three hours for him to come back.

However, the former GP President did not budge and said he would wait for three hours failing which a Police complaint will be lodged.

Meanwhile, Thimmaiah appealed to the citizens of Kodagu to call up that mobile phone number to ask him to come back and collect the garbage, which received overwhelming response.

After three hours, Chirag and his friends, not only came back but also tendered an apology for their ‘negligence.’ However, the embarrassed youths appealed Thimmaiah not to film their faces to which the former obliged. The youths collected the empty packets and promised to dispose the same at their house bins.

Later, Thimmaiah put another video on social media of Chirag holding the empty packets in the paper bag and carrying with him. Thanking the people of Kodagu for supporting his campaign to keep the hilly district green and clean, Thimmaiah also appealed one and all to join hands in the Swachh Bharat Abhiyan.