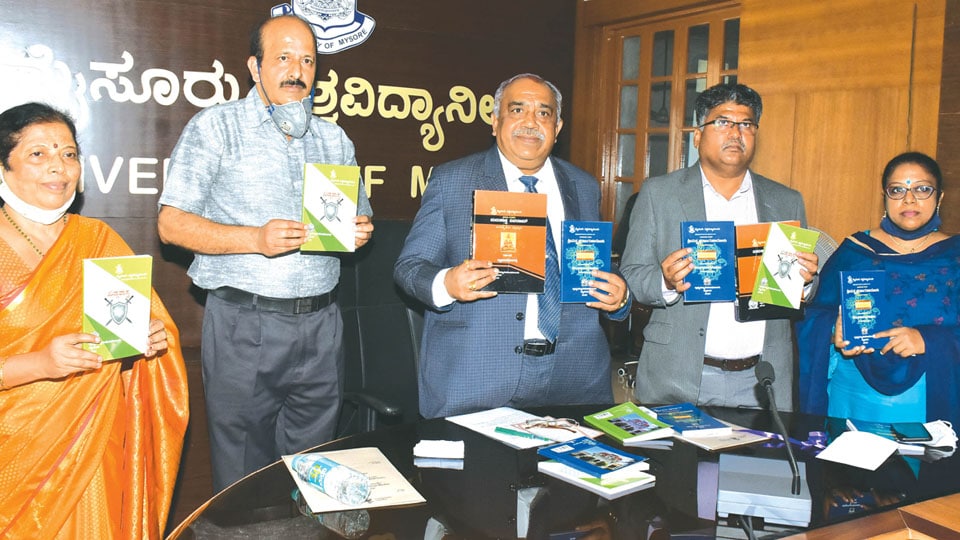 Asserting that the ORI is a treasure trove of the University, he said that the Institute is engaged in bringing out priceless manuscripts in the form of books.

Lauding the ORI for publishing rare manuscripts, Prof. Hemantha Kumar said, it has been planned to get the books released by scholars and people representatives, so that the people realise the importance of such books.

University Registrar Prof. Shivappa, in his address, said that several scholars have worked in the ORI for years. Stating that his mentor G. Ramakrishna too worked for ORI and edited an invaluable work titled ‘Bharatiya Tatvajnana’ (Indian Philosophy), Prof. Shivappa observed that it is important to bring out books on ancient studies in a simple and lucid manner so that even a common man can read and understand them.

Editor of ‘Khadga Shastra,’ Y.C. Bhanumathi, said that in ancient times, much prominence was given for Asi (Katti/ Khadga), Masi (writing) and Krishi (Agriculture). Prominence was also given for teaching the art of war as a measure for safeguarding the State against attackers, she added.

Pointing out that ‘Khadga Shastra’ does not mean only the art of sword fighting, she said that such a manuscript on this art may not be found anywhere else and now the ORI has brought this out in the form of a book.

P. Gowri, an Assistant Researcher at ORI, who edited the work ‘Srimatskrishnaraja Gunaloka,’ said that the original writer of this manuscript is Neelakanta of Mysuru, who lived in the 18th century and was a Court Poet during the times of the erstwhile Mysore ruler Mummadi Krishnaraja Wadiyar.

Noting that Neelakanta has described the rule of Mummadi as the ‘Golden times’ of his era, he said that the work has been written in such a simple language that even the common man can understand it.

Pointing out that this book is based on a very rare script called ‘Tigalari’ written on palm-leaf, he said that Jagannath must be complimented for taking great pains to bring out the book.

Referring to sale of books brought out by ORI, ORI Director Prof. S. Shivarajappa said that it has been planned to organise a Book Mela (Book Fair), during which it is proposed to offer up to 50 percent discount. Stressing on the need for promoting sale of books, he said that many works brought out by ORI have been lying for years at the University Prasaranga in the absence of a proper channel for the sale of books. Now, an action plan is being prepared for holding a mammoth Book Fair, during which more than 3,000 books under various categories & heads and priced between Rs. 20 and Rs. 300 will be displayed for sale, he added.