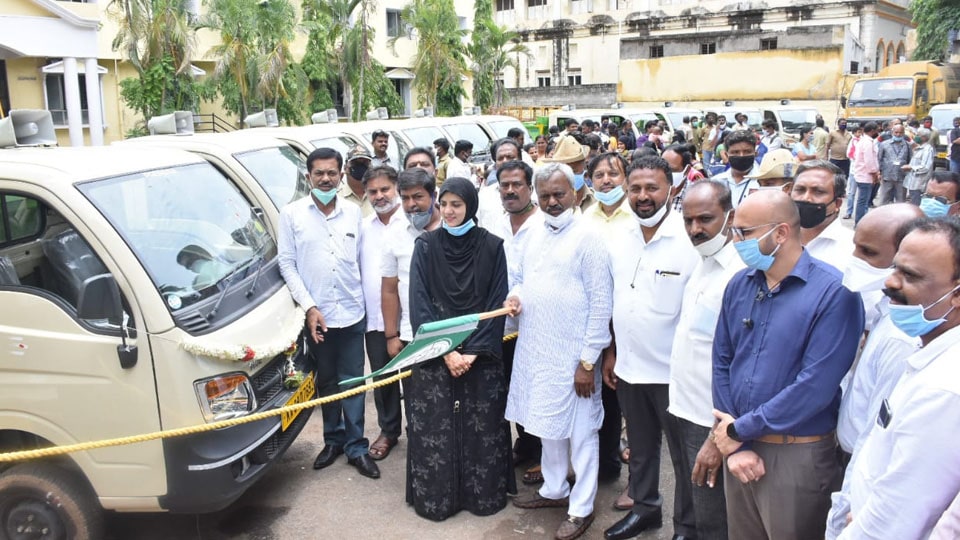 Every MCC Ward gets one vehicle

Speaking on the occasion, Somashekar said it was extremely happy to note that Mysuru is among the six cities in the country which have come out with flying colours achieving 5-Star rating given by the Union Ministry of Housing and Urban Affairs, for keeping their areas garbage-free.

Asserting that the Government will extend all possible help for maintaining the city clean and hygienic in keeping with its reputation, Somashekar said that each of the 65 MCC Wards will get one vehicle, meant to be used for door-to-door collection and disposal of waste.

He called upon the citizens to join hands with the MCC for making Mysuru find a top spot in the global map of cleanest cities.

The MCC has purchased the 65 Auto Tippers at a cost of about Rs.12 lakh each under the JnNURM Scheme. The MCC had sent a proposal to the Government on purchasing the vehicles a year ago and now the proposal has become fruitful with the vehicles hitting the roads. These vehicles will be utilised for Swachha Nagari initiative under Swachh Bharat Mission in all the 65 Wards.

Over the past years, the MCC had purchased 169 such vehicles. But with the passage of time, some of the vehicles have become old, while a few others have been discarded due to mechanical and operational reasons. With 65 new Auto Tippers introduced for service, the MCC has deployed the drivers of discarded vehicles to run the new ones. In the meantime, the MCC has submitted a proposal to the Government seeking permission to appoint new drivers, it is learnt.