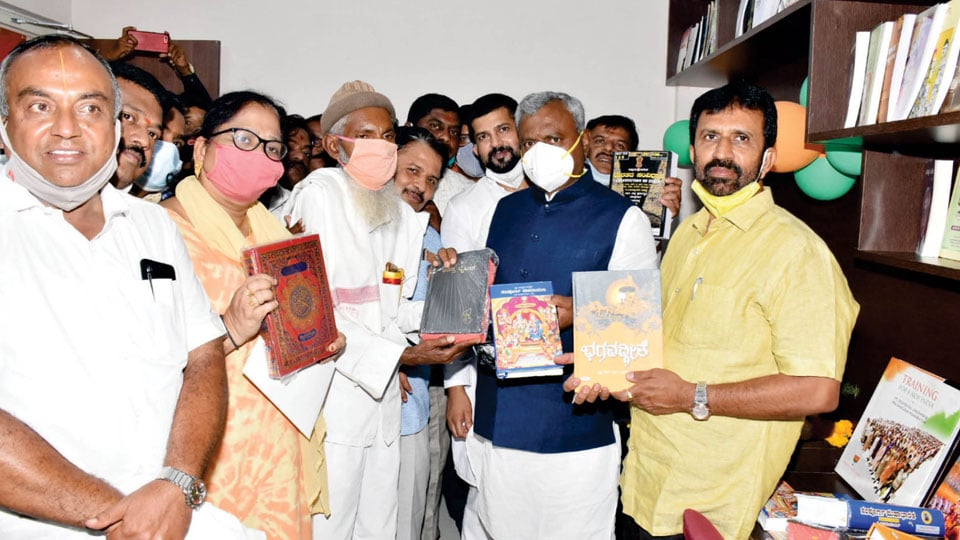 Mysore/Mysuru: Following a call given by the State BJP Unit to establish library at the BJP Offices in all District Headquarters, a library and a public helpline centre was opened at City BJP Office in Chamarajapuram this morning.

Speaking after inaugurating the library, Syed, referring to the birthday of Dr. B.R. Ambedkar today said that the day is known as ‘Knowledge Day’. Turning emotional, he said “My library was destroyed five times and God will punish those who did it. One library is equal to 10 temples as it spreads knowledge and everyone should cultivate the habit of reading good books.”

City BJP President T.S. Srivatsa said that the Party library houses books on Indian Constitution, Indian History, great leaders of the country, social subjects, books for political workers, Ayurveda, home remedies, religious books etc. and added that anyone could walk in to the library and read the books but cannot take the books. An e-library would be opened in future, he said. Srivatsa said that those who want to air their grievances or give suggestions can utilise the services of helpline centre which would forward the same to the concerned Minister, MP, MLA, Corporator or others.