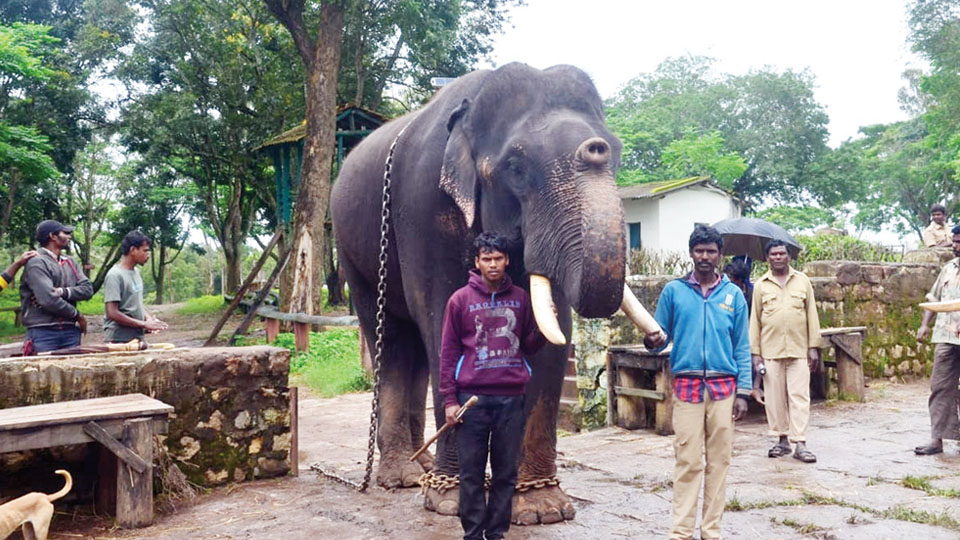 Mysuru: The moment Dasara comes, elephants are not far behind. The Gajapayana (march of elephants) will also start shortly and to participate in Dasara, a new elephant which is in the Dubare camp will also join the other elephants.

He is Dhanajaya, the 37-year-old elephant, who has all the attributes of becoming the Ambari elephant in the future. When he was captured, the now fully tamed elephant was a rouge one.

The Forest Department officials, who saw the potential in him of carrying the howdah, are bringing him to be a part of the Dasara procession.

Where was he captured?: The menace of wild elephants had increased in Hassan district. Not only were they destroying crops grown by the farmers they also were attacking the innocent people and on a few occasions claiming their lives.

According to the direction of the Government, the Forest Department staff began the capturing of the rouge elephants and for a whole year from 2014 to 2015, they captured 22 elephants through ‘Khedda’  operation.

In this operation, the third elephant that was captured was Dhananjaya. He had attacked and killed a farmer near Yasaluru in Sakleshapura and caused tension in the nearby villages.

In the light of this, the Forest Department began capturing of rouge elephants operation on March 1, 2014 and on March 3, the Forest staff, under the leadership of Veterinarian Dr. D.N. Nagaraju, captured it and later transported in a lorry to Dubare elephant camp.

He was named Dhananjaya in the camp. J.C. Bhaskar was appointed as Mahout and J.B. Shonya as the Kavadi. Dhanajaya, who was kept in a crall for about six months, was tamed by the duo. After he gave up his rouge behaviour, he has now been recognised  and got an opportunity to participate in Dasara.

Not scared of any sounds: Dhananjaya is not the type of elephant who is scared of sounds. Since the last four years in the Dubare camp, he is used to the noise and sound that emanates during the nearby village fairs and the sounds of the drum beat during such festivals. As a result, the Forest Department officials are confident that he is capable of participating in the Dasara celebrations.

Gajapayana date not yet decided

The floods in Kodagu and other parts of the State are drawing the attention away from the State Government for the preparation of Dasara festivities. The most important is the fixing of date for Gajapayana, the onward journey of elephants to Mysuru from various camps. Speaking to Star of Mysore here this morning, Tourism Department Deputy Director H.P. Janardhan said that unless the high-powered Executive Committee meets, the date cannot be finalised.

“The officers concerned are busy with the flood relief operations going on in Kodagu and other parts of the State. Only when the Committee meets which is expected soon, will the dates be finalised,” he said.

Dhananjaya is very healthy and strong. Once he crosses 45 years, the Ambari can be tied on him. In fact it was decided to bring him last year itself. However, as only 16 elephants were selected he was left out. But this year, he will be brought and a sack will be tied on him for practice. If he is trained for five years, then he will be fit to carry the Ambari.

He will be trained…

This is the first time Dhananjaya is being brought from Dubare camp. The 37-year-old elephant will gradually be given more responsibilities. Since his behaviour is exemplary, he is being brought to participate in Dasara.

There is great camaraderie with Dhananjaya. We are very happy that we are participating in this year’s Dasara. Our elephant is going to maintain the confidence reposed on him by the Forest Department. He has behaved very well in the camp. —J.C. Bhaskar, Mahout