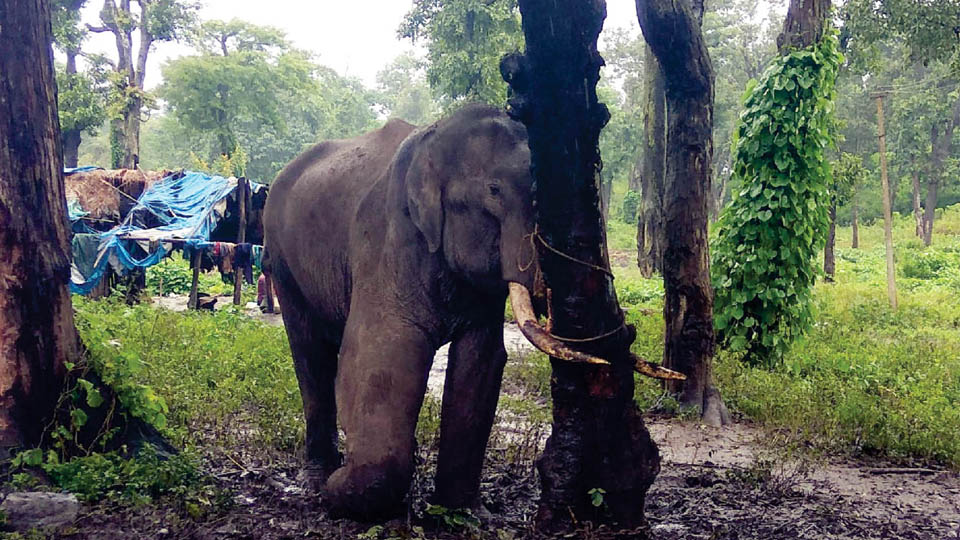 Madikeri:  The injured wild elephant at Aanekaadu Elephant Camp near Kushalnagar is dead. It died this morning due to severe infection on its right forelimb. It may be recalled here that Star of Mysore had published a report on the injured elephant on Aug.11 under the title “Tusker in trouble: Forest officials in Kodagu  grapple to generate funds to treat injured elephant.”

The report had highlighted the plight of the elephant and how the Forest Department was finding it hard to mobilise resources to treat the elephant. The pachyderm, about 20-years-old, was found near Athur Forest Range and was shifted to Aanekaadu. On an average, the Department needs Rs.5,000 and Rs.7,000 for the food and medical expenses daily.

Kodagu Chief Conservator of Forests (CCF) Lingaraju confirmed to SOM this morning that the elephant was dead and it has been buried at Aanekaadu. The tusker was writhing in pain due to the injury. The elephant though was able to stand, could not move a bit due to infection and festering wound.

According to Mahout Ashoka, the tusker would have run from a place sensing danger and its right forelimb could have been caught between trees and the leg would have got twisted. It suffered severe internal fractures and some parts of its legs are infected, said veterinarian Mujeeb, who treated the pachyderm.

Other mahouts at Aanekaadu, however, said that the elephant would have survived if immediate and continuous medical attention was provided. Kodagu District in-Charge Minister S.R. Mahesh had visited the elephant on Aug.15 and had directed the Forest Department officials to take care of the medical needs of the elephant till it recovers from its injuries. The Minister had even named the tusker as “Cariappa.”