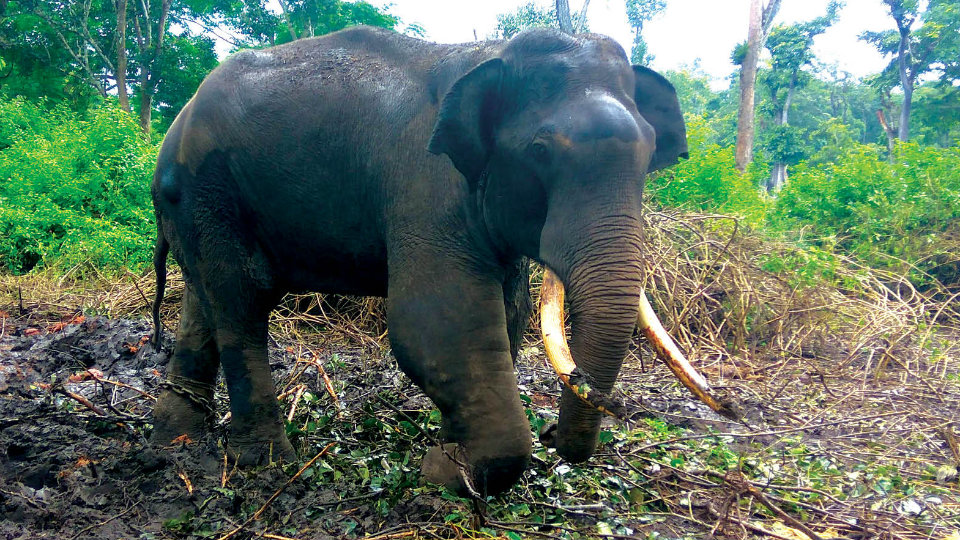 Kushalnagar: – An injured male wild elephant is desperately crying for help in Kodagu. Its condition is worsening by the day and it is silently shedding tears, unable to bear the pain of injury and infection. The Forest Department is struggling to maintain the injured jumbo due to lack of resources and manpower.

The elephant, about 20-years-old, was found near Athur Forest Range by forest staff who were on beat duty. The tusker was writhing in pain due to an injury on its right leg. The elephant, though was able to stand, could not move a bit due to infection and festering wound. Seeing its pitiable condition, Department staff administered some painkillers to the elephant and provided it some food.

Later, the forest staff, with the help of tamed elephants Vikram and Harsha, were able to shift the injured elephant from the forest to Aanekaadu Elephant Camp that is five kilometres from the spot where it was found injured. The elephant is at present lodged at Aanekaadu where it is  being treated.

According to Mahout Ashoka, the tusker would have run from a place sensing danger and its right leg could have been caught between trees and the leg would have got twisted. It has suffered severe internal fractures and some parts of its legs are infected, said veterinarian Mujeeb, who is treating the pachyderm. 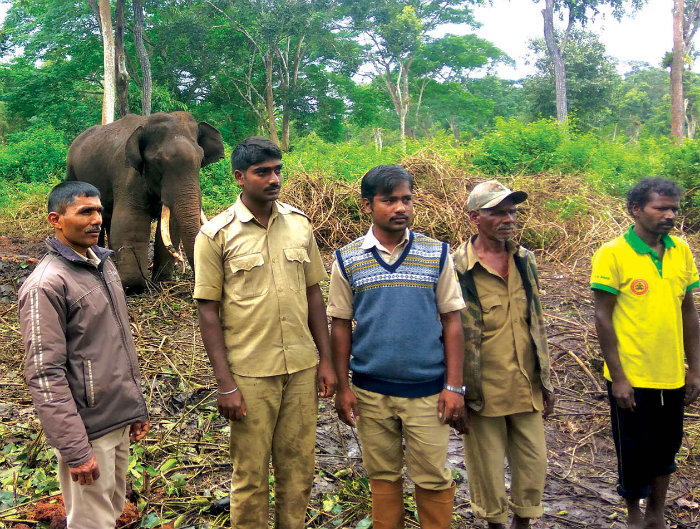 At times, the elephant when trying to move from one side to another groans in pain. Though its regular food intake is normal, its condition is worsening by the day and is growing weak due to pain. Whenever it rains, the elephant must be brought to a shelter and again taken back into the open after the rain subsides.

The tusker needs constant care and the Forest Department-run elephant camp at Aanekaadu is already facing fund crunch and lack of manpower. 62-year-old Mahout Chikka, who trained and tamed elephant Harsha, is looking after the wild elephant. But Chikka says that he has not received his pension since the last four months.

The injured elephant has become a huge burden on the Forest Department as it costs anywhere between Rs. 5,000 and Rs. 7,000 for the food and medical expenses daily.

According to Deputy Range Forest Officer Arun, they have been taking care of the injured tusker since July 20 and already Rs. 1 lakh has been spent on the elephant and the Department was not in a position to generate more funds.

Along with the fund crunch, the Department is also facing severe shortage of manpower. “We are somehow running the show at Aanekaadu now. But if the existing elephants and their mahouts leave for the annual Mysuru Dasara, it will be very difficult for us to take care of the injured elephant,” said Arun. He has appealed to his higher-ups to intervene and save the  injured tusker.

ONE COMMENT ON THIS POST To “Tusker in Trouble : Forest officials in Kodagu grapple to generate funds to treat injured elephant”