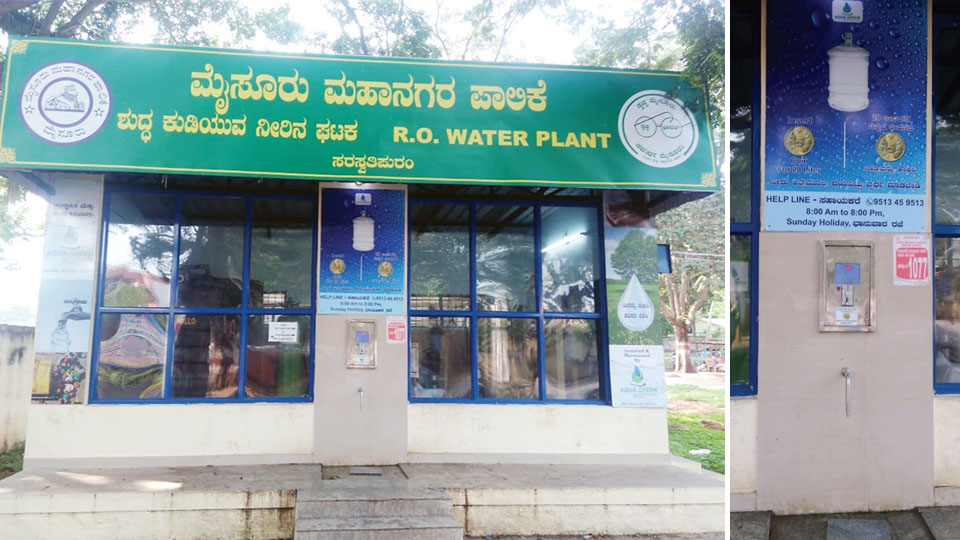 Mysuru: Leaving nothing to chance during summer, the Mysuru City Corporation (MCC) has started preparations to ensure citizens do not go thirsty. The civic agency is setting up many Reverse Osmosis (RO) drinking water plants at various locations in the city. The MCC has already set up 13 such RO units across the city and has grand plans to set up 15 more units.

According to MCC officials, these RO plants are a great success with the residents making maximum use of it especially in crowded areas. These units dispense 20 litres of pure drinking water for Rs.5. To obtain water, users have to insert Rs.5 coin (golden colour) into the coin slot.

Last year, MCC had set up 13 RO units across the city near localities where residents face drinking water shortage during summer. The initiative became successful after people started collecting water from RO units instead of buying packaged drinking water. Areas with thick density of population were identified and the plants were set up for the convenience and utility of the residents. Places like hostels were identified where there is usually large use of water and the RO units were set up.

Each RO plant cost the MCC around Rs.7 lakh and they have been installed at Nazarbad, Gangothri Layout, Hebbal, Manjunathapura, Paduvarahalli, Saraswathipuram and Kuvempunagar among other localities. Sources pointed out that MCC was installing RO plants in those areas that had a history of scarcity of drinking water.

These RO units have been installed under the grants that have come from 14th Finance Commission and tenders have been awarded for maintenance of the units. Of the 13 units, seven were maintained by Acqua Tech of Mysuru while the remaining six units were maintained by a Hassan-based agency. Each unit produces 2,000 litres of drinking water per hour.

“Our aim is to ensure that no Ward in the city faces the problem of water scarcity this summer. Currently, MCC operates 13 RO units across the city. The additional 15 units will come up in areas that often grapple with water scarcity in the summer months,” an official from the MCC said.

Regarding the new units, 10 of them will be set up in Chamaraja Assembly Constituency, five in Narasimharaja segment under the MLA’s grant under local area development project.

MCC that has given its land to Indian Oil Corporation (IOC) to set up and maintain three RO units in the city under the company’s Corporate Social Responsibility (CSR) activities has requested organisations and associations to come forward and take up maintenance.

“The NGOs or associations can support MCC in maintaining a healthy environment by setting up and maintaining RO units,” said engineer Anand.