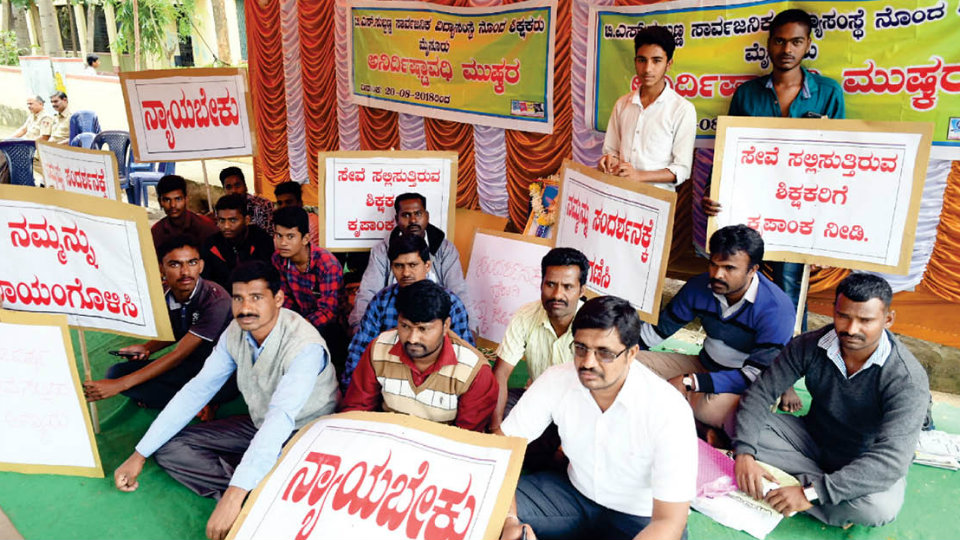 Mysuru:  Teachers of T.S. Subbanna Sarvajanika Vidya Samsthe staged a protest in front of the school in Vidyaranyapuram here yesterday alleging that the Institution was recruiting new teachers for aided schools of the Samsthe without giving preference or opportunity to serving teachers.

The teachers complained that interviews for the new posts have already been planned to recruit 14 teachers in aided high schools managed by the Vidya Samsthe.

Bemoaning that existing teachers had been sidelined for no reason, they said that the management had flouted norms in recruitment of new teachers.

The teachers further said that the Samsthe was running 11 high schools in Mysuru, Mandya and Chamarajanagar districts and added that over 20 teachers have been working full-time in those schools for the last 12 years.

The teachers said they had been working without regular salary with a hope that they would be appointed on regular basis one day.

They feared losing the job if the management went ahead with the new recruitment.

The Vidya Samsthe is managed by Trustees C. Basavegowda, S. Guruswamy and S. Shashibimba. Speaking to Star of Mysore Basavegowda said that they have begun interviewing candidates to fill up 14 posts of teacher as per the Education Act giving due importance to merit and reservation. He added the policy of 1:10 had been followed to call the candidates for interview from 700 applicants.

Referring to the ongoing protest by a section of teachers, Basavegowda clarified that they were all working voluntarily just to gain experience without any payment.

He further said that a few among the striking teachers with eligible qualifications and experience have also applied for the regular job and will be interviewed.

Hence he dubbed the claims of the striking teachers as baseless with no substance.

recruitment policy Teachers protest
Kurubarahalli Sy. No. 4 and Alanahalli Sy. No. 41 row: Former and present MLAs vie for credit
30 per cent of disaster in Kodagu is man-made: M.C. Nanaiah