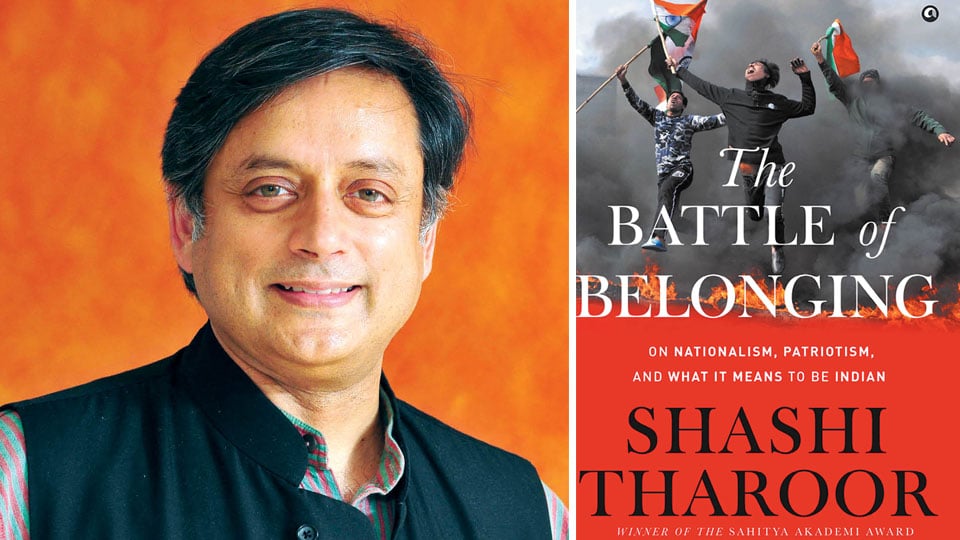 Shashi Tharoor seems to be a non-stop writing machine.  He is a busy man — Member of Parliament, in-demand public speaker, international traveller and what not. In the midst of all that, he finds the time and the energy to turn out not just any book, but thick volumes full of research and analysis.  The latest is typical. Its main title itself suggests a sweeping canvass: “The Battle of Belonging.” The subtitle brings out the scope of the extended survey: “On nationalism, patriotism and what it means to be Indian.”  Handsomely published by Aleph, the book is 408 pages thick, not counting the 25-page long bibliography and a dozen pages of index. How does he achieve this when mundane scribblers like me sweat it out for months to complete a 200-page pretence of a book.

He covers everything, from basics like what is a nation and how the concepts of nationalism emerged, to how Subramania Bharati enriched nationalism and how the idea of India is under threat today from those who seek not just to rule India but also to change India. He himself is an unusual example of a nationalist.  Born in Britain, he was entitled to a British passport.  But he never applied for one.

That is where he distinguishes himself compared to people like me. Long years of travel left me regretting that I had an Indian passport. Immigration offices across the world had contempt for Indian passport holders. They saw Indians as citizenship-seekers or as people ready to break laws in order to make a living.  Numerous are the times I felt humiliated at foreign immigration counters. Those were occasions when I regretted not getting a foreign passport when I could.  The battle of belonging that people like Shashi Tharoor have to fight is a battle they can win.  Ordinary citizens can never win such a battle.

Tharoor brings out the crux of the problem in a sentence that goes like this: “The British writer David Goodhart has interestingly argued that in the global battle between the ‘anywheres’ (cosmopolitans comfortable anywhere in the world, flitting between business-class lounges and five-star hotels, the votaries of globalisation who thought of themselves as citizens of the world) and the ‘somewheres’ (those rooted in a place, a land, an ethnicity, a religion, and local assumptions and traditional prejudices), the ‘somewheres’ had won.”

Tharoor dwells on a subtle point that made British colonialism a failure because it was fundamentally racist while French colonialism was a relative success because it had no trace of racism in it.  A British writer, curious about an impeccably dressed black African in his flight, asked where the African was from and was told: “Me? I am French.”  Not even the most favoured Indian maharajah would have thought of saying: “Me? I’am British.”  The French had colonies but they were never seen as racially inclined snobs.

Is nationalism a negative sentiment in contrast to patriotism which is largely positive?  Tharoor lines up a string of quotations to show how different people looked at this question from different angles. He opens up for us a world of thought where multiple interpretations are available to the reader on a one-touch basis  as it were.

On the face of it, nationalism is in clash with what has become known as globalisation. So how do we reconcile with both? Leaders of the French Revolution held the view that the Rights of Man that they declared were valid for all people everywhere. They swore by “the ability of nationalism and religion, alone among all forms of allegiance, to give moral sanction to martyrdom and violence.”

Ideologically Tharoor of course is inclined against the BJP. He draws attention to the BJP’s “propping up of an idealised leader,” the increasing autocracy under its rule and the “overt demonisation” of Muslims who are “delegitimised as a treacherous permanent foreign element amidst ‘true’ Indians.”  The use of questionable means in the BJP’s “quest for absolute power” is seen as a “departure from the idea of India celebrated by Tagore, achieved by Gandhi and implemented by Nehru and his comrades.”

It is not easy to fault Tharoor’s intellectualised analysis of the problems he handles.  He brings in a touch of logic and gets it backed by an array of authorities and authors he quotes from. That almost every page has footnotes referring to a galaxy of earlier authors gives the impression that his views are well-founded. They certainly are well-argued.  Even those who disagree with him will have to agree that Tharoor is a stimulating thinker.