Home » News » The sorry state of the Government School at Nazarbad 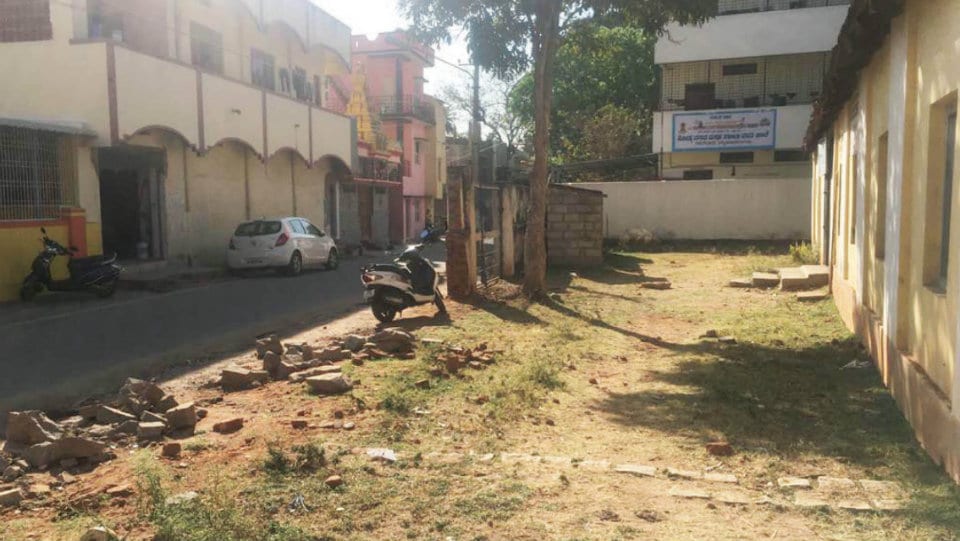 The sorry state of the Government School at Nazarbad

No drinking water post lunch, No toilets for girls, Playground filled with debris

Mysore/Mysuru: With no proper drinking water facility, locked toilets of boys with no toilets for girls and also no ground to play despite the School having a playground, the students of the Government Higher Primary Model School on Mosque Road at Nazarbad are the suffering lot.

The compound of the School that has classes from first to seventh standard collapsed months ago and as the compound is not yet built, the School premises has become a place for the public to attend nature’s call.

29 students studying at the School, are forced to attend classes in the midst of the stench. Many parents are backtracking to admit their wards to the School because of the this, it is learnt.

Also, in the absence of the compound, which acts as a security to the School, the School premises has become a place for illegal activities with drunkards using the premises to consume liquor, regret a few residents.

No toilets for girls, boys’ toilets locked: Though toilets for boys were constructed at a cost of Rs. 2 lakh under Swachh Bharat Mission, it is always found locked. As the collapsed compound is not built, miscreants damage the toilets and after the toilets are used once or twice a day, it is being locked.

But the School lacks toilets for girls and the old toilets are filled with plants and bushes making the toilets unusable.

An appeal to grant funds for the reconstruction of the collapsed compound has been made to the MLA of the Constituency and the issue has also been brought to the notice of the Education Department. The Engineering Division of the Panchayat Raj has been urged to clear the debris of the old collapsed structure, says Udaykumar, Block Education Officer, North Zone.