Home » Feature Articles » They put out FIRE even as their own houses are on FIRE! 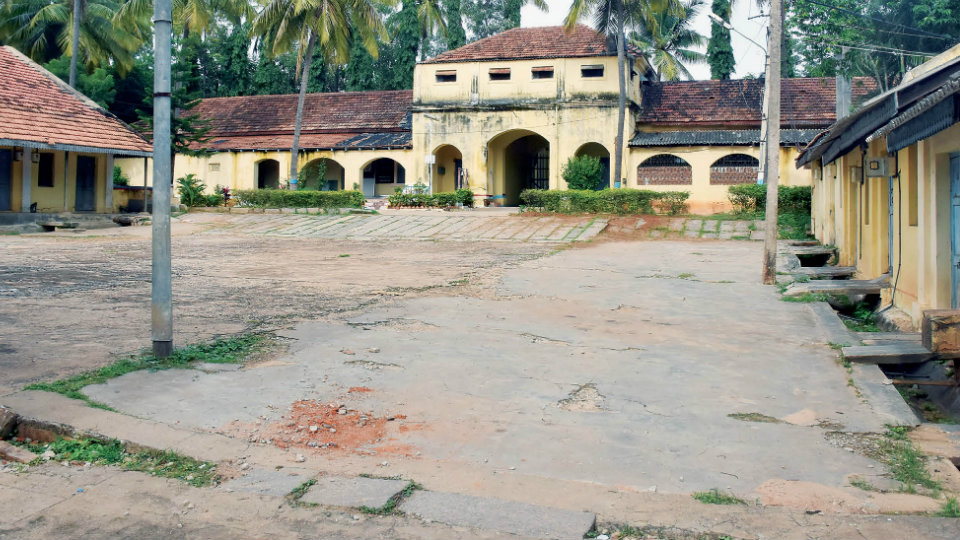 They put out FIRE even as their own houses are on FIRE!

They are on high alert 24X7 responding to the calls in seconds and minutes rushing to the spot, trying to put out fire, saving lives, recovering properties all the while putting their lives at stake. But just peep into the lives of these honest, dedicated, determined firemen and the heart of the people with conscience bleeds. One starts wondering how they can live in such sub and inhuman conditions.

These and other questions cropped up when Star of Mysore visited the Saraswathipuram Fire Station and did a reality check of the living conditions of the many firemen who live in dread and fear in the crumbling Quarters they are housed in. As one enters the 121-year-old Fire Brigade to go to the Fire Station Officer’s chamber, one has to pass through the rest room provided to firemen and what immediately one can see is the complete lack of privacy for them.

The young Fire Station Officer Nagaraj Urs, 32, said that the Control Room was shifted recently following the collapse of the portico. The telephones were ringing even as we entered and suddenly an emergency call came. Urs immediately forgot my presence and rushed to the place where a youth had fallen down the lift.

Another young fireman then took this reporter around and that is when the reality of the conditions that the firemen live in struck hard. The tiled Quarters, all over a century old, were in real pitiable conditions. Doors of many houses were broken; weeds and plants had grown on them.

Entering the house which is unfit for occupation, I could see how in spite of the country moving forward in many areas, we have remained backward or shown complete lack of concern for the people’s lives. Right next door there were firemen’s families occupying the houses, as they had no choice.

“Since we are on emergency call 24 hours a day, we prefer to live in the campus as we can respond to the calls immediately. This place has no water facility, no proper kitchen nor other basic amenities. There are times when we have to go to the nearby park to fill water from a public tap. Since there is no proper electricity connection we have to heat water on gas stoves or use firewood to have  bath. The women in the house are put to extreme hardships because of such harsh conditions,” said a fireman speaking on condition of anonymity. There are 12 families living on the campus and in a few other Quarters, the firemen who come for refresher course training stay. Some of them have put in years of service but even they are forced to stay here where there is not even a minimum facility of a bathroom.

THEY bathe in the open

This was evening when I went around the place and I was shocked to see these firemen having bath in the open. And where do they draw the water from, it is from the fire brigade van.

READ ALSO  Pt. Rajeev Taranath: A Sarod Maestro and a Legend in our times-2

Asked how they could be having bath in the open in such cold conditions, one of them who was lathering his body said, “Do we have a choice? We have to make do with whatever facilities provided to us.”

They are all put up in houses, four-to-a-room and just with barest of facilities and hardly any ventilation and toilets which are as old as the history of the building.

Problems to the forefront

The plight of the firemen would have continued if the portico of the Fire Station had not collapsed on Aug.9, 2019. Till then everyone was taking shelter under the portico from rain and shine little realising what the conditions were just a few feet inside.

Even on that day, the people’s representatives and the officials rushed to the  spot, saw the damages and after the photo-op and empty promises left the place without even as a backward glance.

“We had written to the PWD and the Directorate of Archaeology, Museums and Heritage in 2015 itself explaining to them about the conditions of the building and how unsafe it was. But our plea fell on deaf ears. It is only after the portico collapsed were they forced to visit the place,” said the source. Meanwhile, Fire Station Officer Urs returned from his rescue operation and narrated how they rescued the youth who had fallen down the lift. “Our duty is to first rescue the person and if he is injured rush him to the hospital and only then ask questions,” he said.

Then pointing to the wall near the portico, he said, “The day a portion of portico collapsed, the wall here developed a crack and we had marked it. But within a few days the crack has lengthened and there is always a chance that the remaining portion could come crashing down any moment.”

The trouble is this is a heritage building and hence everyone is scared to touch it. That is how it has been neglected all these years. However, the other new Fire Stations in Hebbal, Bannimantap and RBI Quarters have all modern facilities, he said.

Not only the living conditions but even the working conditions for the firemen here are very harsh. They hardly get their weekly offs. “We have to work on all days of the week and rarely are we allowed the luxury of a weekly off. It is now raining and hence there will always be emergencies. So our weekly offs are cancelled,” he said even as he politely refused leave for a fireman.

“It is now the rainy season, then Dasara celebrations; again we are deprived of the weekly off. This is followed by Deepavali festival and that is the time when we have to attend to maximum fire mishaps and there goes our weekly off again. Then summer arrives which again could result in lot of fires. In short, our firemen are on the move throughout the year,” said another source.

“We sometimes feel why I joined this profession which is so unkind to us. But when we go to douse the fire, save lives, recover properties and receive the blessings of the people, then we forget all the frustrations,” said the fireman with a beatific smile, masking his pain.  Will the authorities concerned wake up at least now and take decisions or will they continue to ignore the plight of the hard-working firemen? Because a PWD official who visited the spot sometime back is learnt to have told the firemen living in the Quarters, all they needed were a few alterations — forgetting that these are the people who stake their lives even as they douse the fire while their own houses are on fire.

Even though minutes after the portico collapsed, MLA S. A. Ramdas and L. Nagendra visited the place, and later Ministers V. Somanna and R. Ashoka also came and inspected and directed the officials concerned to clear the debris, nothing has happened even after nearly 20 days.

It is not only the portico that has collapsed but even the other portion is very weak and likely to fall down any time. Hence, the Fire Station Security staff is keeping a watch on it in shifts.

As the Fire Station is classified as a heritage structure, it is taking a long time to clear the debris. Even though the Fire Station, MCC, PWD and Heritage Department Officers have urged the authorities concerned, the process of clearing the debris has not started. There is no clarity on steps regarding the weakened portico, as no one knows whether it should be demolished and built in the original style.

Another major reason for the delay is the lack of coordination between the MCC, PWD and Heritage Departments as each one is putting the blame on the other giving excuses. While the MCC is keeping mum as though it has nothing to do with it, the Heritage Department officials say that since it is a heritage structure, only after they submit a report should any action be taken.

Meanwhile, the officials from the PWD and the Heritage Departments inspected the Saraswathipuram Fire Station recently following a report in Mysooru Mithra, the sister publication of Star of Mysore and looked into the problems faced by the firemen.

Speaking to SOM in this regard, District Fire Officer Raju said that the said officials had visited the spot and inspected the Quarters which are on the verge of collapse. They have submitted a report to the Deputy Commissioner stating that it would be appropriate to vacate the Quarters at the earliest.