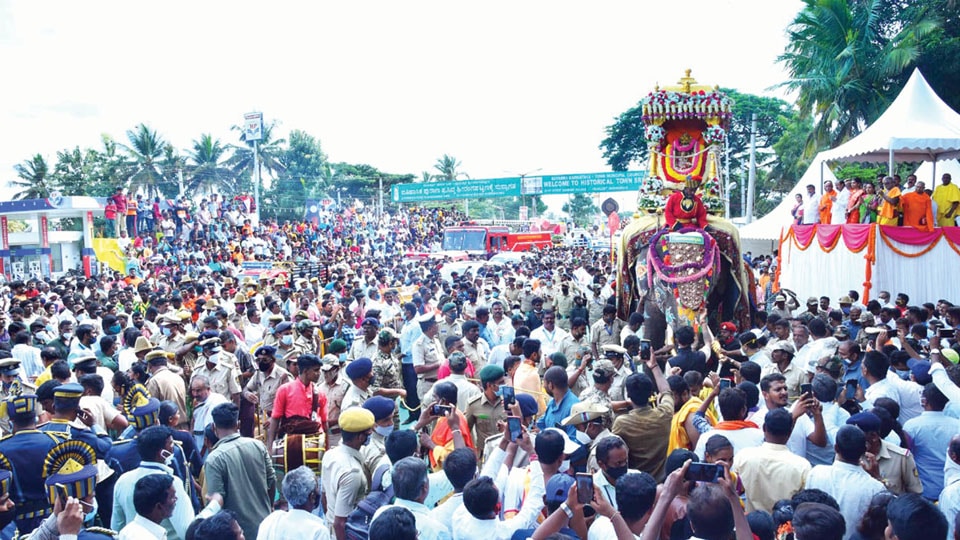 Srirangapatna: The three-day Srirangapatna Dasara got off to a spectacular start with thousands of people becoming witness to the annual event in the Fort town of Srirangapatna in Mandya district on Saturday.

Adichunchanagiri Mutt seer Nirmalanandanatha Swamiji launched the Srirangapatna Dasara by offering floral tributes to the idol of Goddess Chamundeshwari in the Howdah placed atop elephant ‘Gopalaswamy’ near the Bannimantap at Kirangur in the outskirts of the town, amidst chanting of mantras by priests and slogans hailing the deity by the huge crowd.

As soon as the procession began amidst the bursting of crackers, Howdah carrying elephant Gopalaswamy, which got scared by the sound of bursting crackers, ran amok forcing the authorities to stop the procession. Later, the idol of Goddess Chamundeshwari was placed in a  Silver Mantapa mounted atop a flower-decorated open vehicle and the procession continued was taken out, which passed through Kirangur Circle, Baburayanakoppalu, Mysuru-Bengaluru Highway, Kuvempu Circle, TMC Circle, Raja Beedi and Post Office Circle, before culminating at Ranganathaswamy Temple grounds, covering a distance of about 4kms.

More than 25 folk and cultural troupes accompanied the procession. The taluk administration had made seating arrangements for the public at Kirangur Circle, Kuvempu Circle and Dodda Masjid Circle.

Thanks to divine intervention, a major tragedy was averted as Howdah carrying Elephant Gopalaswamy, scared by the sound of bursting of crackers, run amok, much to the shock of the huge crowd.

As elephant Gopalaswamy, carrying the Howdah, marched along with Kumki elephant Kaveri and completed one round around Bannimantap and proceeded further, the bursting of crackers by the enthusiastic crowd began. Gopalaswamy, who got scared by the sound, ran amok and stood close to Kaveri, which was following him.

There would have been a huge tragedy had Gopalaswamy ran into the huge crowd. Mahouts, Kavadis and Forest Department officials, succeeded in guiding Gopalaswamy and Kaveri to a safer spot, far  from the crowd. As soon as Gopalaswamy started to run amok, the crowd too ran helter skelter, resulting in a near stampede. Soon, the procession was halted and the idol of Goddess Chamundeshwari was placed in a Silver Mantapa atop an open vehicle, which travelled on the designated route before culminating at Ranganathaswamy Temple ground.

COVID guidelines and COVID-19 appropriate behaviour was hardly followed at the event, with people vying with each other to have a close glimpse at the idol of Goddess Chamundeshwari. The Police and the authorities had a tough time in controlling the crowds and also on ensuring COVID norms.

However, the people were seen blaming the negligence and lethargic attitude of officials in restricting the number of people , to regulate crowds and also in preventing bursting of crackers close to the elephants as they  marched in the procession.

The newsmen alleged that the District Administration had not given Dasara advertisements to all newspapers but had given the same only to a few papers and expressed their displeasure.

When the journos questioned the District Minister on discrimination of newspapers by the district administration, Minister K.C. Narayanagowda said that it was wrong on the part of the district administration for giving advertisements only to a few newspapers and added that he would collect information about it and assured journalists of taking action on the erring officials.