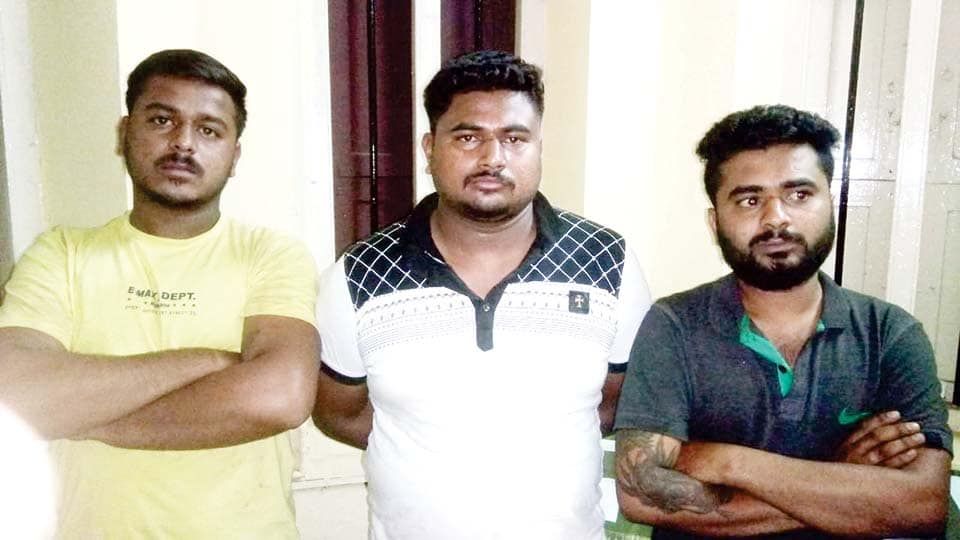 Mysuru: The City Police have arrested three persons in connection with the murder of an auto driver in 12 hours. The accused and the victim were friends and had developed enmity over a financial dispute.

Twenty-eight-year-old S. Manu alias Johnny was murdered on the intersection of Sunday night and Monday morning near Saraswathipuram Fire Brigade and the assailants had stabbed him over 15 times. They had left the dagger dangling on his back and had left the place. Lakshmipuram Police had registered a case.

The accused are identified as Nikhil alias Appu, Madhusudhan alias Madhu and Yoganand, all auto drivers and friends of Manu. While Manu was residing at his uncle’s place at Muneshwara Nagar, Appu and Madhu are the residents of Gundu Rao Nagar on the outskirts of the city. Yoganand is a resident of Ashokapuram.

According to the Police, the accused had allegedly killed Manu over a monetary dispute. Manu’s paternal uncle Mahadev, who had also suspected the handiwork of Appu and Madhu behind his nephew’s murder, had told the same to the investigators.

Manu, who was earlier driving the autorickshaw owned by Madhu, had met with an accident resulting in the damage of the vehicle. However, Manu was unwilling to share the expenses towards the repair. Manu also refused to get the vehicle released from the Police Station and had taken another auto for rent. This had enraged Madhu.

Recently, the accused had exchanged heated argument with Manu over the same issue near the latter’s house. As Manu had turned adamant, Madhu was  angry with the former. On the intersection of Sunday night and Monday morning a group of passengers had hired Manu’s auto from the prepaid autorickshaw stand at KSRTC Sub-Urban Bus Stand. It was during that time, the accused, who followed the vehicle in an auto till a distance, executed their plan.

Lakshmipuram Police Inspector S. Gangadhar, Siddappaji and Kumar were in the investigation team. The auto that was used by the accused to follow Manu and the murder weapon have been seized.