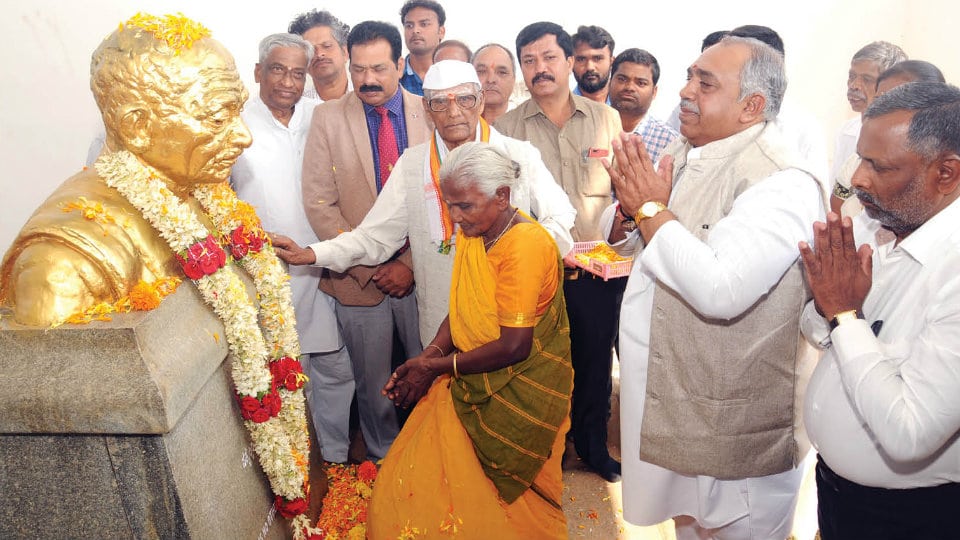 Mysuru:  Sarvodaya Day or Martyrs Day was observed in several parts of the city to pay homage to the Father of the Nation Mahatma Gandhi, who was assassinated on this day, 71 years ago.

An elaborate function organised by Department of Gandhian Studies and Department of Studies in Commerce,  University of Mysore, was held at Gandhi Bhavan in Manasagangothri here this morning, where not only the bust of Gandhiji is there, but it also houses the replica of Sabarmathi Ashram and the sculptures of the Mahatma in various poses.

Freedom Fighter Y.C. Revanna, speaking on the occasion, recalled the contributions of Mahatma Gandhi and said that the sacrifice for gaining the country’s independence by the leader of the nation was unforgettable.

Along with the Mahatma many youth also fought for the freedom movement and many had been jailed. The influence that the Mahatma had over the entire nation was something that was seen to be believed as the whole country including farmers,   youth, women, poor and illiterate rallied behind him in his non-violent struggle against the British, he said and added that at the same time the violent struggle which a few leaders advocated was abhorred by the majority in the country.

University of Mysore (UoM)Vice-Chancellor Prof. G. Hemantha Kumar said that though Mahatma’s dream for independent India proved fruitful, his Sarvodaya Movement (meaning welfare or upliftment of all) remained unfulfilled. His followers and devotees, however, tried to this dream of the Mahatma.

The members of Mysuru District and City Freedom Fighters Association gathered at Freedom Fighters Park in Subbarayanakere where they shared their experiences with the students about their struggle for country’s independence.