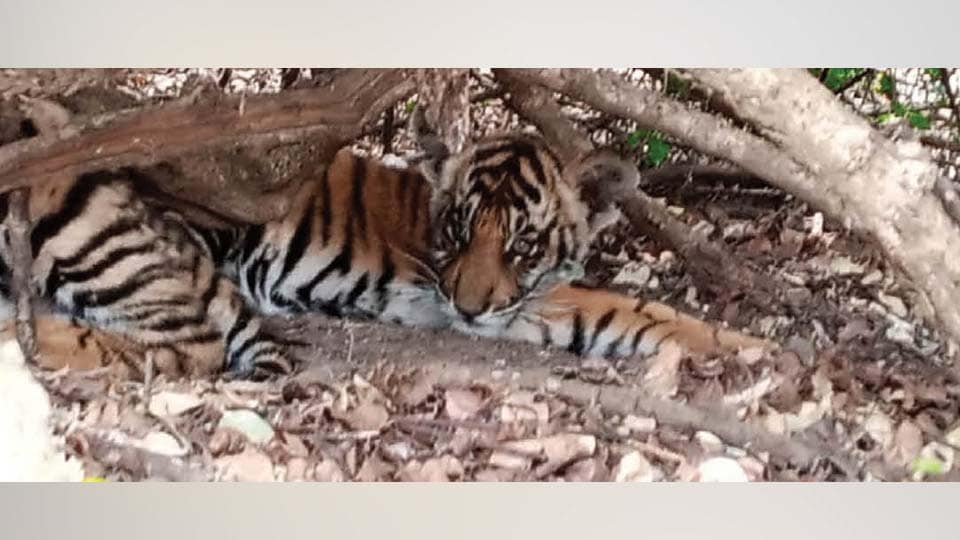 Two die, another cub being treated at Mysuru Zoo

Mysuru: Three tiger cubs, aged about two months, which were abandoned by their mother have been traced near Nugu in Bandipur Tiger Reserve on Sunday afternoon. Of the three cubs, two died of hunger and dehydration and the other cub has been brought to Mysuru Zoo for treatment, where it is recovering.

Though the Zoo Veterinarians began providing treatment, one tiger cub died and the other began to respond to the treatment and sources in the Zoo said that the tiger cub consumed chicken mince meat yesterday night and is showing signs of recovery.

One more cub with mother

The tigress had given birth to four cubs about two months back and for one-and-a-month, the mother and her cubs were moving together. But suddenly, the mother abandoned three of her cubs and has taken one cub with her. The mother taking just one cub with her came to be known through the pug marks found by the Forest staff during combing operation.

Why mother abandons her cubs

There are many reasons for a tigress to abandon her cubs. If an infant is weak, small or defective, mothers will instinctively abandon or cull the animal to concentrate their resources on the stronger babies that stand a greater chance of surviving.

One theory found in scientific literature on parental infanticide suggests it’s part of “normal’’ maternal behaviour where a female can adjust her litter size to suit her ability to raise offspring.

Staff has been deployed during night also to trace the tigress.

This for the first time that the Forest staff at Bandipur has come across a tigress abandoning the cubs.

Five years ago, three cubs were abandoned by a tigress at Nagarahole Reserve Forest out of which two had died and the other disappeared mysteriously.

A Forest Department team led by ACF Sumeetkumar, Subashrao Patil and Hediyala RFO Manjunath are continuing the combing operation to trace the tigress and the cub.