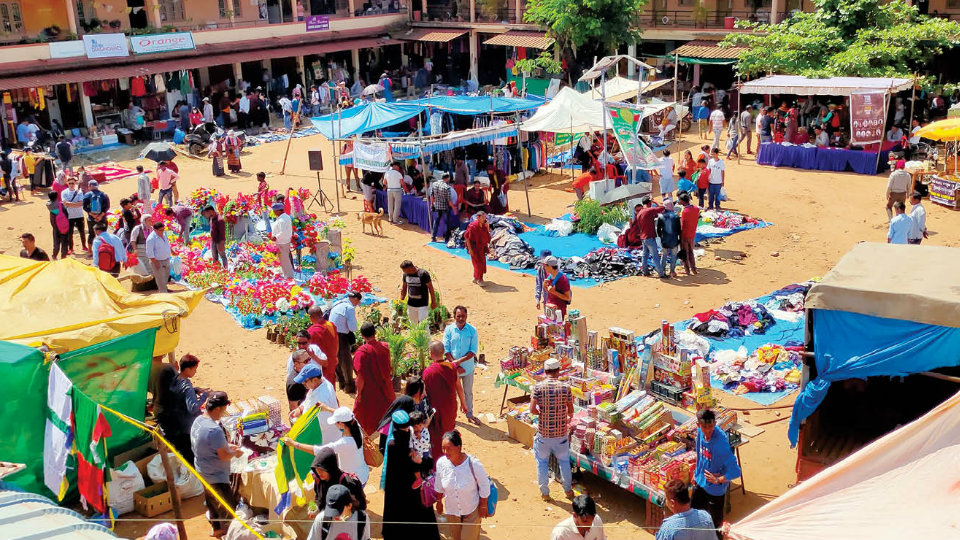 Kushalnagar: Festive atmosphere is prevailing at Tibetan settlements in Bylakuppe, Mysuru district, as Tibetans are observing ‘Losar’, their New Year in a grand way. The entire settlement is wearing a bridal look with thousands of Tibetan monks and the Tibetan workforce celebrating the arrival of the New Year.

Losar celebrations have begun a month ago and will culminate on Feb. 24 and it’s an exciting time for Tibetans settled at Bylakuppe since ages. Many are calling home to wish their families and loved ones. From Feb. 24, the celebrations will continue for another fortnight.

A few Tibetan students who are in Mysuru have come to Bylakuppe and a few have gone to Dharamshala in Himachal Pradesh to spend the New Year with their loved ones. Many Tibetan students in Mysuru made their way to India directly from Tibet, many unaccompanied by parents or relatives.

Sent by their families on dangerous journeys on foot across mountains and past Chinese border patrols in order to have better access to education, for some Tibetan youth, cellphones and the internet are the only links to home.

Tibetan Year of the Iron Mouse

This year, it is Losar – 2147, Tibetan Year of the Iron Mouse and it falls on Feb. 24. While the Gregorian calendar is a purely Solar calendar, the Tibetan calendar is a lunisolar calendar. This means that the Tibetan year is composed of 12 or 13 lunar months, each beginning and ending with a new moon. A thirteenth month is added every two or three years so that an average Tibetan year is equal to the solar year.

Tibetans consider Losar to be an auspicious time of year to renew one’s life. Losar related rituals fall into two different parts.  On the 29th day of the 12th month, Buddhists, like all Tibetans, say goodbye to the old year and let go of all its negative or bad aspects. Part of this involves cleaning one’s home or room from top to bottom, including any stairs outside. The Losar is welcomed with wholesome prayers and by inviting all good, auspicious things.

Families prepare for Losar days in advance by thoroughly cleaning their homes, decorating them with fragrant flowers and the walls with auspicious signs. Debts are settled, quarrels are resolved, new clothes are acquired and special foods are made.

Generally referred to as Bylakuppe, this camp for Tibetan refugees established in 1961 is actually named Lugsung Samdupling. Since few can pronounce that, it is better known as Camp 1. It lies within walking distance of four or five other camps that were established later including the more popular Camp 4 with its Namdroling Monastery, which in popular parlance is called the ‘Golden Temple.’

As Bylakuppe is filled by monks and common Tibetans, there are two sets of celebrations. While the monks pray for the welfare of humanity by staying indoors, cut off from the rest, the common man’s celebrations is limited to prayers and cleaning rituals. Monks go into meditation mode for over 15 days. They worship deities including Yamakantaka and Mahakali.

Tibetan monasteries at Bylakuppe are decorated with symbols and hangings, and devotional rituals are performed in reverence to the protector of  spirits. Different traditions and rituals are followed on this occasion but they are unique to Tibet. People dress in the finest traditional clothes and jewellery during the new year festival.

A unique part of the celebrations is the Cham Dance — a Monastic Dance in monasteries performed only by monks. The ritual is performed for moral instruction to viewers, destruction of bad spirits and for the greater good of humanity.

It is a highly choreographed dance where a select group of the resident monks will perform as directed by the mystic dance master. They will be dressed in brightly patterned attire and masks. The performance is a dramatisation of the philosophy of good over evil, and it’s also a ritual offering to the deities and guardian of the faith.

The masks in Tibetan Cham Dance represent various characters form Tibetan Buddhism Divinities, history and divinities in various manifestations. The mask is made carefully by the skilled craftsmen with proper alignment to the measurements provided in the scripture.

Another highlight of Losar is ‘Monlam’, also known as The Great Prayer Festival. The main purpose of Monlam is to pray for the long life of all the holy Gurus of all traditions, for the survival and spreading of the Dharma in the minds of all sentient beings, and for world peace.

This year, Monlam is for a disease-free world in the wake of Novel Corona Virus (COVID-19) spread in China that borders Tibet.

While the streets of Bylakuppe that usually bustles with activity shuts down for Losar as everyone is celebrating at homes and monasteries, one can find long rows of fluttering prayer flags and beautifully strewn monasteries and nunneries that add to the mystique and charm of the place.

Then there are Tibetan markets, held every Thursday and during Losar, where they sell items, dresses, sweaters, jackets and shoes at dirt-cheap prices. During Losar, it is clearance sale where all the previous year’s goods are sold off to buy new ones in the New Year.

In his message, Abbott Zeekgyab Rinpoche has thanked the Indian and Karnataka Governments for their continued support. “Tashi Lhunpo Monastery, apart from being a tourist and pilgrimage Centre, is a place for exclusive Nalanda teachings. Even the Dalai Lama has acknowledged this and the Monastery preaches the Nalanda tradition, the original School of Tibetan Buddhism,” he added.