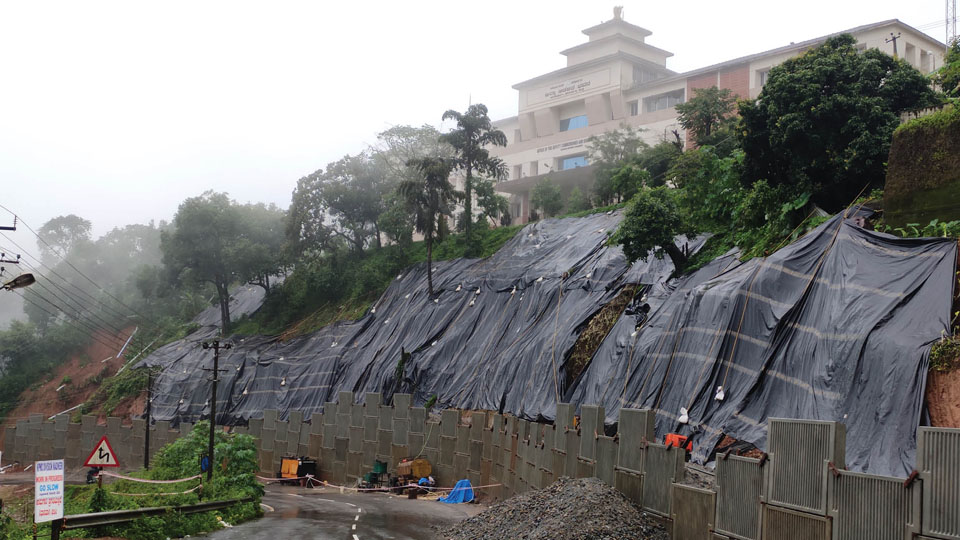 Pipeline breaks leading to loosening of soil; Engineer says no threat to the building

Madikeri/Kushalnagar: A minor landslide in front of the Kodagu District Administrative Office (DC Office) located on a steep gradient along the Madikeri-Mangaluru Road has caused concern. The portion of the land next to the retaining wall that is being built at a cost of Rs. 5 crore, caved-in on Thursday.

It is raining cats and dogs in Kodagu and heavy Punarvasu Rain has resulted in havoc, especially in Madikeri and Virajpet taluks. The mudslide in front of the DC Office has been caused due to seepage and soil turning loose due to incessant downpour.

The 40-ft retaining wall construction began in June this year and only a portion of it has been constructed. The contractor had to stop the work due to heavy rains. Last Wednesday, a storm water pipeline next to the retaining wall broke and a small stream of water was created.

Waking up, the DC Office staff summoned the contractor to clean the mess and the entire road was cleaned up from where the retaining wall began. For the record, the DC Office was built at a cost of Rs. 14.43 crore.

It was inaugurated in November 2014. Now the retaining wall itself costs Rs. 5 crore. The wall will be 140 meters in length and the height varies from 30 to 40 feet and the contractor has been asked to complete the works by December this year. The tender to construct the retaining wall has been bagged by Mysuru-based Ayyappa Constructions.

Speaking to Star of Mysore, officials said that a pipeline has been constructed from the DC Office till the road for the rain water to flow onto the road below, without seeping into the soil. Tarpaulin sheets have been covered on the remaining steep-gradient space that overlooks the Madikeri-Mangaluru Road.

The tarpaulin has been covered so that water does not seep into the soil, threatening the building, a few metres from the gradient. To prevent the tarpaulin sheets from flying away, they have been bound tightly with stones and ropes.

“One of the stones from the tarpaulin hit the storm water pipe (installed when the office was constructed), causing it to break. This caused water to flow like a small stream bringing the mud from the top. Also, the Forest Department has cut a tree in the DC Office complex and due to force, a branch fell on the stone which in turn fell on the pipe,” the officials explained.

As a precaution for future water flows, the pipe will be removed and a concrete tunnel (drainage) will be built in the place of the existing pipe for the water to flow down smoothly, Officials explained and said that this concrete drain will sustain the structure till the next 50 years.

While constructing the retaining wall too, care will be taken to make space for rain water to flow out. Outlets will be created so that there is a natural outflow without the soil getting loosened.

“Water will not be inside and as it will flow out, the sustenance of the retaining wall and also the DC Office will be longer,” they said.