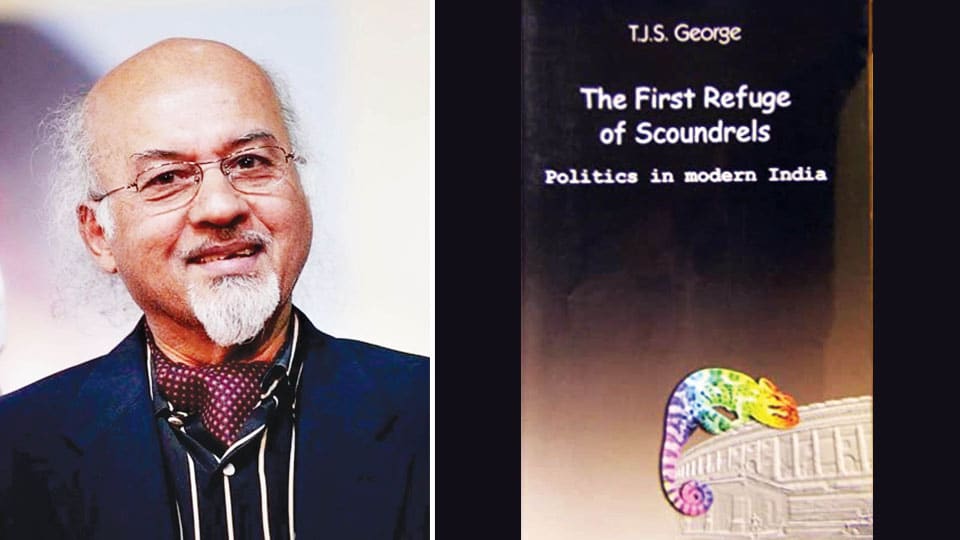 A journalist is a grumbler, a giver of advice, a tutor of nations. Four hostile newspapers are more to be feared than a thousand bayonets.”

Last Sunday, 12.6.2022, when I read veteran journalist TJS George, who wrote in his weekly column Point of View that it was his last column under #Point of View, I was both surprised and disappointed.

Surprised because he is not the one to hang up his spurs, no matter what. After all, who has the guts to tell George: ‘Come on George, you have been writing this column with clockwork time sense for 25 years without a break. Now want to hang up your spurs?’

After all, his functioning fitness is amazing. Writing is his second nature, after breathing. A prolific writer of books and articles.

I was disappointed because, reading his weekly column had become a habit with me, like going to the Church every Sunday for a devout Christian. It was an intellectual stimulant for me even when I did not agree with his views. Specially about his bete noire Modi.

Whatever it be, my perception of his thinking and writing is that he is neither a rightist (of course impossible) nor a leftist (exceptions are there) nor a centrist. Then what is he? Well, for me he was a duty-conscious journalist — tall as a mountain and vast as the ocean. In his dictionary, there is no word called ‘compromise’. That is the kind of journalist he has been and is. Well, he indeed deserved the country’s prestigious civilian honour Padma Bhushan that was bestowed upon him in 2011.

I am reminded of Philippines President Ramon Magsaysay’s death in an air crash in 1957. A journalist of the Associated Press (AP) who was also in the plane survived the crash though suffered serious injuries. A duty-conscious journalist, like our George, he immediately dictated the news of the crash to AP and only then lost his consciousness.

George, to the extent I know him personally and professionally, is not only duty-conscious as a journalist but also one who believed in what he wrote, no matter who agrees with him or who does not. That perhaps is the secret of his success as a writer and journalist.

READ ALSO  The bugles are calling for war

The renowned British novelist and writer Somerset Maugham has put this idea most beautifully in a few words. He says: “The secret of successful writing is that you believe in what you write.” I have no doubt George believed (right or wrong) in what he wrote and the beauty of his writing, its readability, is in the brevity of each sentence he writes. Hence, a great communicator in writing, a rare gift. Though he has mastered the english language, he did not indulge in rhetorics. But those who worked with him say that he is a pedant. He takes the reader to the journey’s end, even when there is no denouement at the end.

George always appeared like an angry, disgruntled journalist critical of the establishment. Not only of PM Modi’s but also the earlier ones. He did it as if it was his commitment to the cause of our country.

In 2003, he published a collection of his articles under the column Point of View with a curious headline ‘The First Refuge of Scoundrels — Politics in Modern India.’ It has eight sections and runs to over 300 pages covering various subjects. Readers will get to know how politicians betrayed our country. For example, now forgotten MNCs like Enron and Monsanto were helped to loot our country by our politicians. Of all-pervasive corruption and looting of national wealth. Tehelka’s expose about corruption in BJP and more…

The contents of the book and the comments, unfortunately, seem relevant to present day politics of the country, if not the commerce, agriculture and industry. I was so much impressed by that book I bought over a hundred copies and gave them away free to those who came to our office on business or visit. Our MPs are depicted as chameleons on the cover of the book (see picture above).

George was surprised, nay flummoxed, that I could so soon write such a big piece on our visit. A very modest, soft spoken person that George is, he felt, I guess, a bit embarrassed rather than flattered about the accolades I showered on him in the article.

Here is the quintessential ‘Georgean’ response to my Abracadabra column on that visit. I make no comments on it, as it is eloquently self-speaking:

Wow, Ganapathy, what a column! And so fast! I must admit that I look quite sexy in that picture, but I felt self-conscious reading such compliments which I do not really merit. I knew you were a very good friend of mine, but even from a friend, it was quite a shower of  praise. I am grateful of course, but I feel scared when I think how I can live up to such estimates and expectations.

I am now eagerly looking forward to what you have to say about the Great Man. My problem is that I don’t plan to write anything specifically built on that visit. I was truly impressed by his informed comments on every current issue, by his practical approach to life and his dreams for India. But mine is a different kind of column, as you know, and I only make references to such experiences when an occasion arises. I’ll wait. Thank you, Ganapathy, for your friendship and I’ll now go and raise a hearty toast to your health. Love to you and Ralie from both of us.

Having written these thoughts about TJS George the journalist extraordinaire laying down his sword (which is supposed to be the pen), let me venture to relate his kind of writing to the opinion expressed by Napoleon Bonaparte mentioned at the beginning of this article.

Yes, George is a grumbler, a giver of advice, a tutor of nations.

4 COMMENTS ON THIS POST To “TJS George, Journalist Extraordinaire”