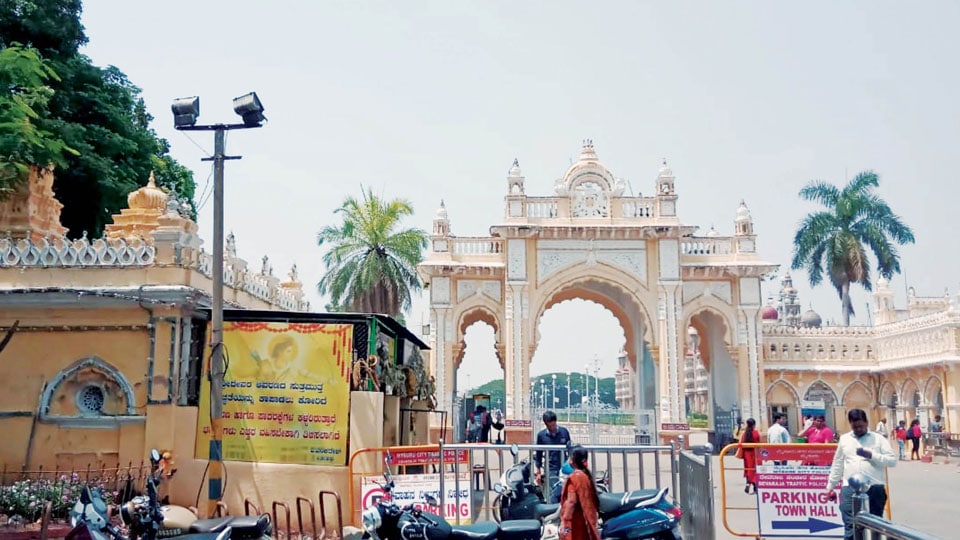 Mysore/Mysuru: Despite many challenges surrounding inter-State travel amidst COVID contagion, the Mysore Palace has seen a big jump in tourist footfall since last month. This has brought cheers to tourism stakeholders who were worried about the sagging industry picking up after over six months of inactivity and also under the constant threat of virus.

The Palace had remained shut for over 70-80 days due to lockdown and even when the rules were relaxed, tourism was given the last preference because once the tourist places are open, people would naturally crowd the places, increasing the risk.

Subsequently, the Union Government announced some relaxations including opening up of a few places of tourism to improve economy. Accordingly, the Mysore Palace and Sri Chamarajendra Zoological Gardens were allowed to open but with strict guidelines and social distancing measures.

But the Palace and Zoo received lukewarm response from tourists. In initial days, hardly 25-30 domestic tourists came  to see the Palace.

This kind of response was expected as the country was seeing an unprecedented spike in virus infection. The footfalls gradually improved from two digits to four digits, thus bringing smile on the faces of authorities and stakeholders.

Deputy Director of Mysore Palace Board T.S. Subramanya told Star of Mysore that initially people were hesitant to come out of houses fearing the pandemic. As the economy slowly opened up, people started moving out of their home towns by taking all precautionary measures.

Not much foreign tourists are coming to the Palace due to the virus threat and also due to a ban on international travel. In August, only 22 foreign nationals visited the Palace when compared to a minimum of 1,000 during normal days.

“This month too, only 13 foreign tourists have come till Sept. 14. We are hoping for the pandemic to end soon so that the tourism industry picks up in Mysuru as it is a livelihood to hundreds of families, directly or indirectly,” he added.

Mysuru alone attracts close to 35 to 40 lakh tourists a year. Tourism and hospitality is the main industry of Mysuru and surrounding areas as there are not many manufacturing and service industries around. The economy is either directly or indirectly related to tourism and hospitality and the sector employs over 25,000 persons.

Visit to the Palace no doubt includes safety protocols. “We have taken all precautions like compulsory safe distancing, face masks, thermal scanning and hand sanitisers for each and every visitor. Sanitisation is done at regular intervals inside the Palace to make the visit safe for tourists, Subramanya said.