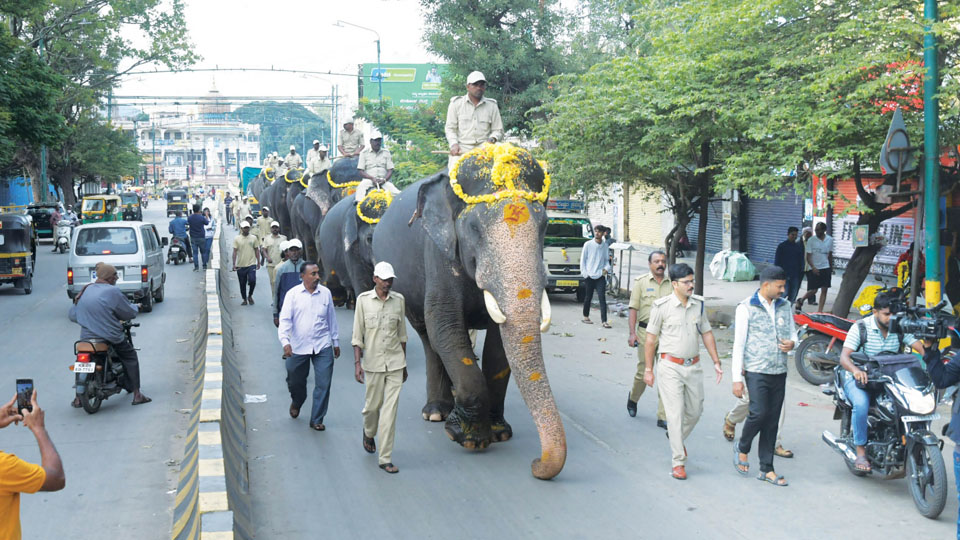 Mysore/Mysuru: The training for the first batch of nine Dasara elephants on the Dasara procession route began this morning with Howdah Elephant Abhimanyu leading the team. The elephants walked majestically on the Jumboo Savari route after a gap of two years as training during the previous two years were held inside the Mysore Palace premises with limited elephants due to outbreak of COVID-19 pandemic.

Before the commencement of the dry training (training without carrying weight) at about 7 am, puja was performed to all nine elephants by Priest S.V. Prahallad Rao near Kodi Someshwara Temple inside the Palace premises.

Captain Abhimanyu then led his team through Balarama Gate and a large crowd had assembled on either side of the procession route to have a glimpse of the forest guests after two years.

The first batch of nine Dasara elephants led by Howdah Elephant Abhimanyu, which arrived in city on July 7, entered Mysore Palace on Aug. 10, where they were given a traditional welcome. The nine elephants underwent weight checking on Aug. 11. Arjuna, who had carried Golden Howdah before Abhimanyu took over, remained the mightiest by weighing 5,725 kg and Abhimanyu, stood fourth by weighing 4,770 kg.

The nine Dasara elephants — comprising Abhimanyu, Bheema, Gopalaswamy, Mahendra, Arjuna, Dhananjaya, Kaveri, Chaitra and Lakshmi — came out of the Balarama Gate of the Palace at about 7.10 am and walked majestically via K.R. Circle, Sayyaji Rao Road, Government Ayurveda Hospital Circle, Old RMC Circle, Bamboo Bazar, Moulana Abul Kalam Circle (Highway Circle) and reached the Torchlight Parade Ground in Bannimantap. The elephants took one hour and 18 minutes to cover a distance of 5 km from Kodi Someshwara Temple inside the Palace to the Torchlight Parade Ground in Bannimantap. The Dasara Jumbos were given two minutes break at Government Ayurveda Hospital Circle and Moulana Abul Kalam Circle. They were led to the Torchlight Parade Ground where they were given rest and fed water. The nine Dasara elephants did not panic when vehicles such as buses and other motor vehicles passed by them.

During the return journey, Bheema led the elephants from the Torchlight Parade Grounds to the Palace. He was followed by Lakshmi, Arjuna, Mahendra and others. Abhimanyu walked last as he had the task of controlling other elephants if they panicked.

Deputy Conservator of Forests (DCF) Dr. V. Karikalan said that dry talim (training without weight) began from today and added that the elephants were being observed for their behaviour. Special diet for the Dasara guests will begin from today and the responsibilities for the elephants will be decided in the coming days, the DCF said.

While motorists gave way for the elephants, pedestrians and passersby were seen clicking photographs on their mobile phones besides fruit and flower vendors offering bananas and flowers to the elephants.

Range Forest Officer Santosh Kumar, veterinarian Dr. Mujeeb, Rangaraju, Akram and others were present during the first day of training this morning.