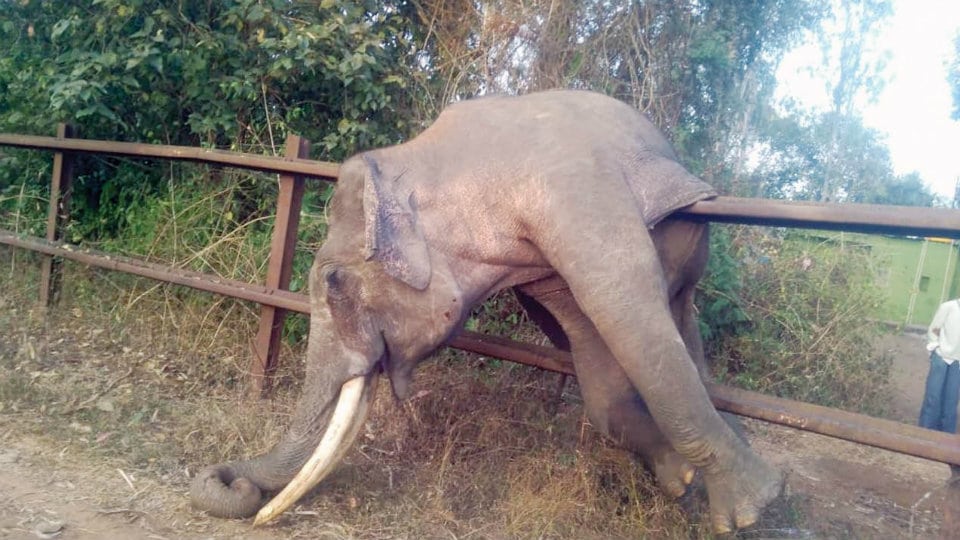 Hanagodu: A forty-year-old healthy tusker died while trying to leap over a fence that was laid using old Railway tracks at Nagarahole Forest Division of Nagarahole National Park. The elephant was stuck in the iron railing and could neither move forward nor jump backward and died a painful death.

The incident occurred in the wee hours of today morning near Veeranahosalli Forest Department quarters in Hunsur taluk. To prevent elephants from entering human habitat, the Forest Department has laid Railway line fencing along the border of the Nagarahole National Park.

Near the Veeranahosalli Forest Department quarters, the forest staff had created a gate near the Railway fencing between the forest and their housing quarters to go for routine forest rounds. The tusker had developed a habit of straying out of the forest through this gate from the past few days.

The elephant used to enter the fields through this gate and destroy the standing crops.Following complaints from farmers about their crops, forest officials had closed and sealed this Railway fencing gate three days back.

Today morning, the tusker, habituated to enter through the gate leaped over it, only to be trapped.  Nagarahole Forest Division veterinarian Dr. Mujeeb said that the elephant died due to heart attack while jumping over the fencing. He described this incident as unfortunate and the exact cause of the death could be determined after post-mortem.

A post-mortem was conducted near the spot and the carcass of the animal was consigned to flames in the presence of Forest Department officials.

Meanwhile, local farmers urged the government to prevent incidents of wild elephants straying out of forest by raising the height of the fencing.

They said though  90 per cent of incidents of animals straying out of forest have been reduced after the Railway line barriers were laid around hundreds of kilometres of Nagarahole Forest Range, still 10 per cent of jumbos were coming out of the forests after jumping over the fencing and were destroying crops in the fringes of forest. They demanded the authorities to increase the height of fencing.