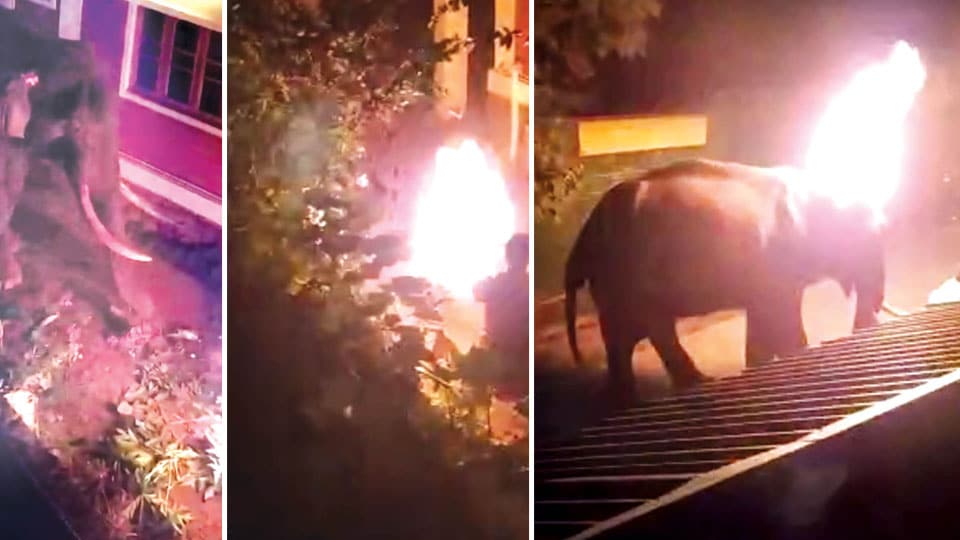 Mysore/Mysuru: A 40-year-old wild elephant which strayed into a resort near Masinagudi of Nilgiris District in Tamil Nadu, was killed by an act of human cruelty as a burning tyre and clothes were hurled at it by the staff of a private resort at Mavanallah.

Tamil Nadu Forest Department officials said the badly injured elephant, bleeding in its ears, was found by some Forest Department guards in Masinagudi in the end of December, but it died before it could be taken for treatment to a facility at the Mudumalai Forest Range. On conducting an autopsy, officials realised that severe injuries had been caused because of the burns.

The arrested have been identified as Raymond Teen, the resort owner and Prashant, a staffer. One more accused in the case Ricky Rayan is absconding. The incident occurred around Dec. 27 or Dec. 28 and the injured elephant was spotted in the first week of January.

According to officials, the accused had hurled a burning tyre and clothes on the elephant, which was roaming near their resort. Later, the elephant was spotted groaning in pain near the Singara Forest Range. The elephant was tranquillised and the officials decided to treat the elephant that had several bleeding wounds on its back.

Forest officials had developed a close bond with the injured elephant after treating it for over a month. To provide better treatment, the officers decided to shift the tusker to an elephant camp in Mudumalai Forest Range. With the help of four other Kumki elephants, the injured animal was put on a truck. However, the elephant died on the way, near Theppakadu.

Shocked by its death, a forest guard bade a tearful goodbye to the elephant and the video clip had gone viral on social media. In the moving clip, Pollan, the forester was seen crying and gently stroking the elephant’s trunk and saying, “Whom will I give fruits to hereafter?”

After the tusker died, special teams were formed to identify the perpetrators of the crime. Meanwhile, the investigators caught hold of a video clip that showed the tyre in flames being hurled on the animal. The video showed the fleeing elephant trumpeting in pain. Later, Prasad and Raymond were arrested.

Investigation revealed that the accused were under the influence of alcohol. Officials said that it seemed that the resort workers were trying to scare the elephant away by throwing something on fire towards it. If it was a stick or some other article it would have hit the elephant and fallen. But since it was a tyre, it got stuck to the elephant’s ears for much longer, leaving the elephant in trauma.

Orders have been passed to seal the resort. The owners of the property were running a homestay in the upper floor of the building with four rooms.