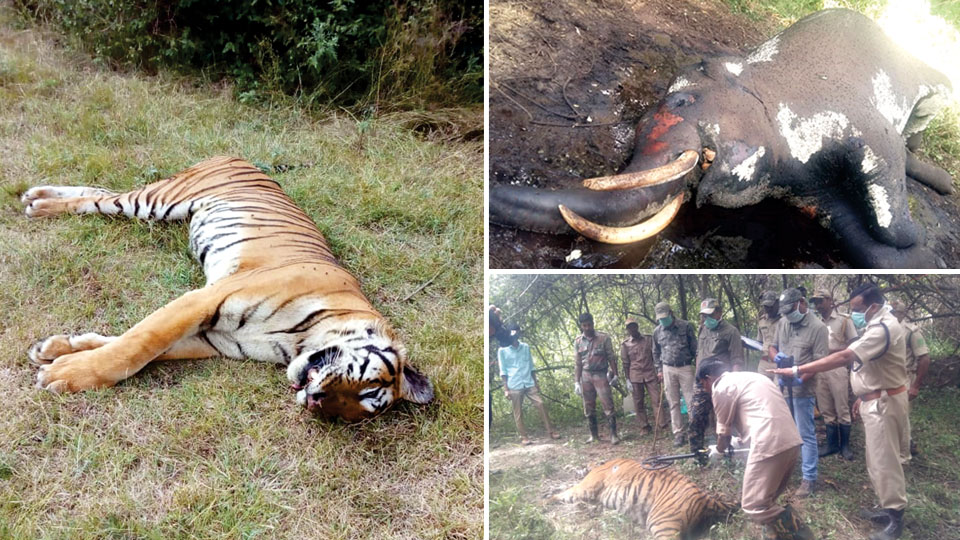 The tiger, which was found dead at Bandipur Reserve, was prowling near the villages on the fringes of Himavad Gopalaswamy Hills and the Forest Department had launched a combing operation to trap the feline that was terrorising the villagers.

The combing operation was launched three days ago near Himavad Gopalaswamy Betta in Bandipur Tiger Reserve and the forest staff found the tiger’s body last evening at Kalaiahana Katte groves at Hirekere near Hangala village. A post-mortem revealed that the tiger’s stomach was empty and it was a death by starvation. Officials have ruled out any foul play.

Bandipur Project Tiger Director Ambadi Madhav said that the dead tiger was a male aged 10 to 12 years. It died due to natural causes and an examination of the carcass indicated that the canines had worn out and the tiger had lost the capacity to hunt and eat in the wild. One of its claws had dropped off owing to old age, he said.

Authorities have collected samples of the viscera and have sent it to the Institute of Animal Health and Veterinary Biological, Bengaluru, for analysis to ascertain the exact cause of death. The carcass was burnt after post-mortem.

In the adjoining Nagarahole National Park, a male tiger aged around 10 was found dead in the Kallahalla range and the authorities suspect the cause to be from a territorial fight or starvation. The carcass was about four days old and had putrefied.

Bandipur is among the best landscape for Tigers and harbours nearly 110 to 130 tigers besides a rich density of elephants. But the National Park is also surrounded by nearly 150 villages and hence, conflicts are also high. Last year, as many as four tiger deaths were reported from Bandipur and 11 tigers died in the adjoining Nagarahole.

Forest officers also found the carcass of a tusker at Kallahalla range of Nagarahole National Park. The elephant had been attacked by another tusker and deep wounds were seen all over its body. Nagarahole wildlife veterinarian Mujeeb said that this being the mating season, the two tuskers might have had a fight over a female.