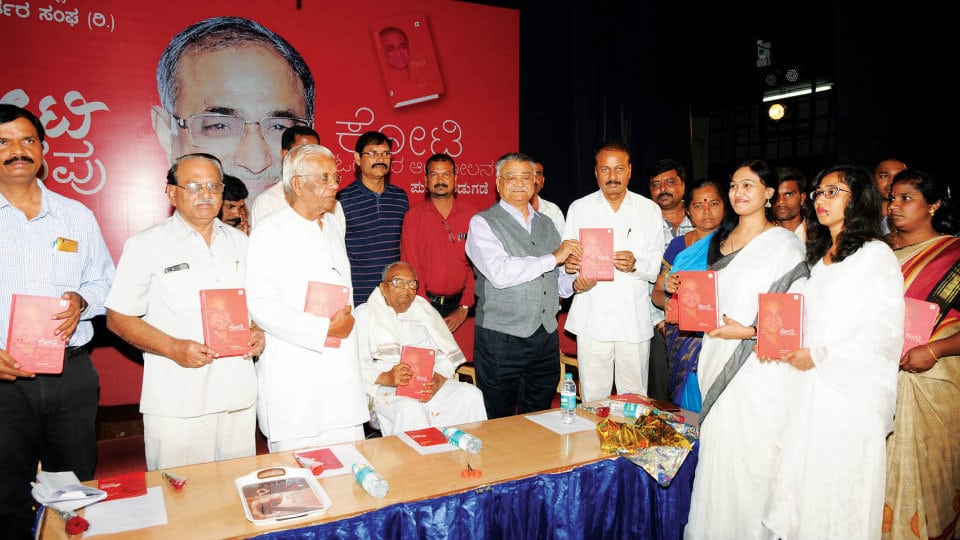 Speaking on the occasion, SOM Editor-in-Chief K.B. Ganapathy (KBG), who was one of the guests of honour, said that the book brought out by the MDJA was timely and meaningful.

Noting that although Rajashekar Koti is not amongst us today, KBG said that Koti’s principles and ideologies and his fight for the cause of the oppressed sections of the society readily comes to our mind. Recalling Koti’s efforts for providing civic amenities to the farmers’ Vegetable Market on M.G. Road, when people’s representatives failed to address the issue, KBG said that Koti’s socialist thoughts, actions and writing can never be erased from memory.

KBG said that he too had discussed this issue with Koti, as the Market place was so dirty, unhygienic and dusty, to make it a modern, clean and hygienic farmers’ vegetable market but failed because of non-cooperation from politicians and bureaucrats who said since there was a case pending in the Court nothing could be done. KBG added surprisingly no serious efforts were made to see the case was taken to its logical end.

Recalling the time when Koti was the President and he (KBG), the Vice-President of MDJA, KBG said, “taking note of lack of vehicle parking space in MDJA premises near Akkana Balaga School, we two along with others, had identified a spacious site for MDJA near Nanjaraj Bahadur Choultry and had discussed this with the then DC Manivannan. As the matter was to be discussed at the higher level, I and Koti decided to go together to Bengaluru to meet Ministers and higher Government officials, when Koti insisted on travelling to Bengaluru in his Benz car.”

“Koti, after picking me from my house, drove to Bengaluru at a very high speed, when I requested him to drive slowly as I had undergone a by-pass surgery,” KBG said and added that it was then that he came to know about Koti’s craze for driving.

Recalling their efforts at the Government level in Bengaluru to get a new space for MDJA, KBG said that Koti was a man who never rested until his plans were accomplished.

Recalling that Koti played a vital role in getting agents and reporters for Mysooru Mithra in the early days, KBG said that he would never forget the generosity shown by Koti towards him.

Stating that Koti was a socialist thinker and an idealist, who faced any situation with courage, KBG said that Koti’s professionalism was key to Andolana’s success. He further said that Koti always believed that a newspaper should function as a voice of the society.

Veteran journalist Patil Puttappa, in his address, said that there was no one who could beat Koti when it came to character.

Maintaining that he had not seen a journalist like Rajashekar Koti in his lifetime, Puttappa recalled the days when Koti worked for his (Puttappa) ‘Prapancha’ newspaper at Hubbali.

Noting that Koti was known for his simplicity and humbleness, he said that Koti, along with his wife Nirmala, grew up in the community taking the community along. Stating that Koti was a model to every journalist, he explained how Koti stood above others when it came to character and attitude. MP R. Dhruvanarayan, social activist P. Mallesh, Samvahana Prakashana’s D.N. Lokappa too spoke on the occasion.