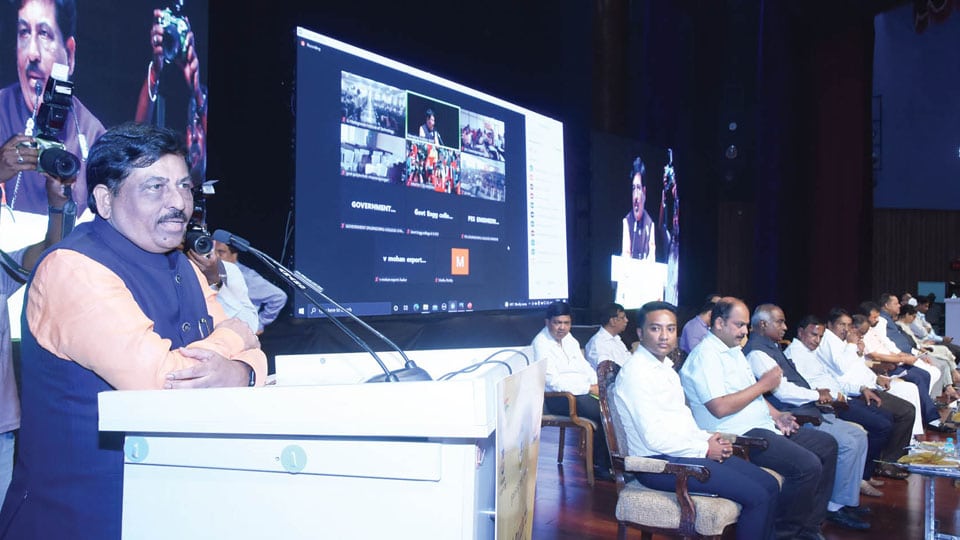 Mysore/Mysuru: Large and Medium Scale Industries Minister Murugesh Nirani said that will power was a must for entrepreneurship.

He was speaking after inaugurating the ‘Udyami Aagu, Udyoga Needu’ (Be an Entrepreneur, Become an Employer) — a programme aimed at attracting youths and professional students to entrepreneurship and employment generation, organised by the Department of Industries and Commerce in association with other Government agencies at KSOU Convocation Hall on Hunsur Road here on Apr. 28.

Nirani pointed out that students will be extended all help to become entrepreneurs in the areas of their interest and experts from various sectors and Government Departments will provide the necessary guidance.

Pointing out that subsidies will be provided to economically weaker communities to become entrepreneurs by starting industries, Nirani said that the programme is being held across Karnataka to promote entrepreneurship among technically qualified persons to turn them into employment generators instead of being job-seekers.

Highlighting the subsidies available in various sectors such as Textiles, Ethanol production etc., the Minister said that  Karnataka has emerged as one of the top FDI (Foreign Direct Investment) recipients with a share of 42 percent in the country.

Maintaining that the State is one of the most attractive investment destination because of many industry-friendly policies and progressive reforms, he said that Bengaluru has been an innovation hub with many global companies setting up their R&D centres in the city.

Stating that Nalwadi Krishna-raja Wadiyar was a great source of motivation and inspiration for him, Nirani said that he has set up 22 industries in different sectors, providing direct or indirect employment to thousands of people.

Minister for Municipal Administration and Small Scale Industries MTB Nagaraj, in his address, said that IT Major Infosys, which was founded with little investment by N.R. Narayana Murthy, Dr. Sudha Murty and others, has now grown into a huge Multi-National Company (MNC) providing jobs to lakhs of technically qualified graduates.

Noting that Industries Minister Murugesh Nirani has now become a big industrialist after starting a small-scale sugar industry, Nagaraj recalled his growth as an entrepreneur by becoming the owner of the biggest brick industry of the State, providing jobs to over 500 people, after starting with a small brick kiln way back in 1968 near Bengaluru.

Contending that the BJP Government in the State was providing a subsidy of 75 percent for entrepreneurs from the SC community, the MLA said that no other Government in the past has provided such a huge subsidy.

Stressing on the need for promoting entrepreneurship among young and enthusiastic youths, he wanted industries to grow multiple fold in the next 10 years.

Minister Murugesh Nirani also interacted with students and urged them to start their own enterprises and create numerous opportunities for themselves and others.

Around 5,000 students from the districts of Mysuru, Mandya, Chamarajanagar, Chikkamagalur, Hassan and Kodagu districts coming under Mysuru Division participated in the programme through video-conferencing.

Later in the day, Kaigarika Adalat was conducted at the same venue. A total of 39 grievances were received by the authorities and were disposed off during the  event. The grievances pertained to nearly 15 Departments of the Government. The programme, which was held in Mysuru after a gap of more than 10 years, was an initiative to help industrialists and other stakeholders to resolve their grievances and complaints on the spot.

Speaking during the Adalat, Minister Nirani assured that measures will be taken to address the problems and grievances raised by industrialists and that the concerned Department will be asked to interact with the stakeholders for resolving issues.