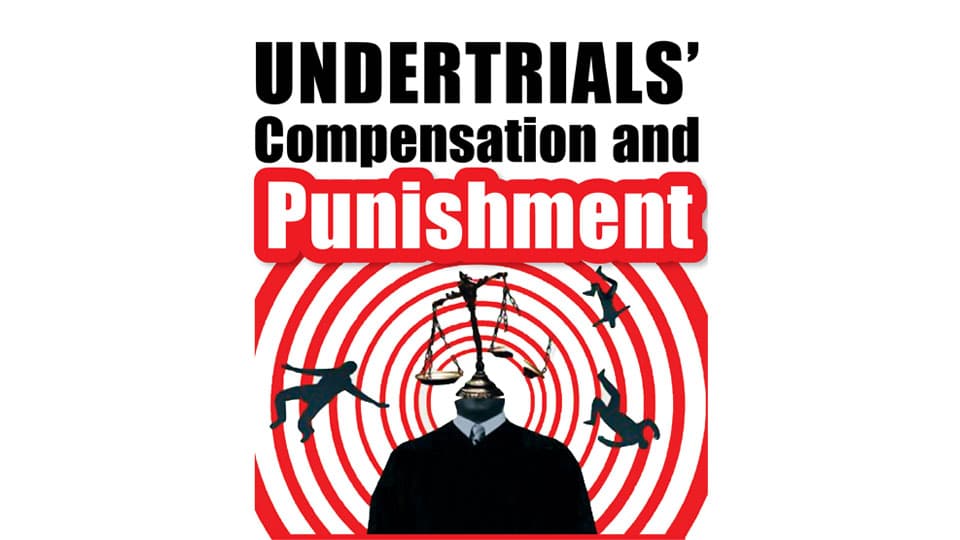 On May 27, Shah Rukh Khan’s son Aryan Khan was cleared of all charges due to insufficient evidence in the infamous “cruise ship drug bust” case. Immediately after the verdict, Sanjay Gupta, a film-maker tweeted, “So Aryan Khan is and was innocent, says Bombay High Court. Who compensates for what he went through, his family went through?”

This is an essential question to consider in a country like India, where 62% of prisoners are undertrials. They usually turn out to be innocent or the case against them is dismissed due to insufficient evidence, but they are imprisoned while the trial goes on and on and on. Who will compensate them for their lost time and trauma?

Last year, Vishnu Tiwari from UP, who was jailed in 2001 and convicted of rape, was acquitted of the crime; it was a false case but he had spent 20 years in jail.

Worse is the case of Jagjivan Ram Yadav, who was arrested in 1968 in Faizabad for allegedly killing his sister-in-law. He never faced trial because the authorities lost his papers! But nevertheless, they kept Yadav in prison, awaiting the authorities to find his lost papers for 38 years. When he was arrested, he was the father of a two-year-old boy. In 2006 when Yadav was given bail, he was 70 years old and his two-year-old son was 40!

Can anything be so unjust and cruel? It’s like being dead while living. Someone’s got to pay. The Supreme Court granted him bail, nothing else, no compensation, no punishment for the officers who “lost his papers” and kept him in prison for 38 years.

So, Aryan Khan’s 20 days in jail is nothing compared to the above cases of how inhumane our justice system can be? How callous our Police Officers and investigating agencies can be?

It is time, our Courts take such incompetent and insensitive officers to task and provide compensation to the victims when the Government and its arms have wronged them. Unfortunately, these questions only come to our leaders’ minds when a celebrity is in trouble.

Many may recall, back in 2013, our Parliamentarians were busy trying to get a pardon for Sanjay Dutt in the 1993 Mumbai blast case. Surprisingly, the first official support petition was put forth by none other than former Supreme Court Judge Justice Markandey Katju! Justice Katju stated that Sanjay Dutt had “suffered a lot and had to undergo various tribulations and indignities.”

Where was this sensitivity of our Parliamentarians and Justice Katju when newspapers just two years earlier had reported that 70% of inmates in India’s prisons had not been convicted of any offence and were in jail as undertrials? Why didn’t anyone speak up about finding ways to release these prisoners and compensate them?

Speaking of compensation and how Governments waste citizens’ money to settle personal scores, I am reminded of the Bombay High Court quashing Brihanmumbai Municipal Corporation’s (BMC) order to demolish actor Kangana Ranaut’s office and asking BMC to pay her compensation                      of Rs. 2 crore.

When so many tax-payers’ money is wasted to fight frivolous cases, why can’t they use that money to bail out poor petty thieves who are just trying to feed their families? When Salman Khan can do it, why not the Government? Salman Khan’s NGO once paid Rs. 40 lakh to bail out 400 undertrials in UP.

It’s time people filed compensation cases like ISRO scientist Nambi Narayanan did. In 1994, Narayanan was falsely charged with espionage and then investigated by the CBI, then discharged. But then the State Government ordered a re-investigation which the SC quashed. Yet, no action was taken against the Police officials.

But in 2018, the SC awarded him a compensation of Rs. 50 lakh and constituted a committee headed by a former Judge of the SC to find ways and means to take appropriate steps against the erring officials. Actions are still waiting to be taken.

While our Government refuses to pay compensation to their own citizens when they botch up a case, they are forced to pay when they deal with international courts, as it happened in the Naval War-room Leak case.

In this case, one Lt. Commander Ravi Shankaran, an ex-Naval Officer, stole documents from the Directorate of Naval Operations, New Delhi (aka, Navy War-room) and gave them to Thales, the maker of Scorpène-class submarine, enabling them to clinch a 3 billion euro Submarine Deal with the Indian Navy!

It turns out Ravi Shankaran was caught twice by CBI, and he escaped both times! Then he finally surrendered in London and India tried to get him extradited. After many hearings, the British Court quashed that extradition order as the two-member bench ruled: “Prima facie, there is no case against Ravi Shankaran.”

So after ten years, our investigating agency couldn’t even make a case that proved “prima facie” there was a case?! Not just that, the British Court ordered the CBI to pay over a crore to Shankaran for the legal costs incurred by him!

The victims of Government apathy and their families have to suffer ostracisation from society. The children grow up without a father; a mother has to make ends meet as a breadwinner while trying to pay a lawyer to get her husband out. Someone’s gotta pay for this crime, and it is a crime perpetrated by the Government through its officers against its citizens.

The Government has to pay up and the erring officers must be punished. But will they? No way. We are not a mature, kind and humane democracy.

We never were. We fear we’ll never be.

2 COMMENTS ON THIS POST To “Undertrials’ Compensation and Punishment”