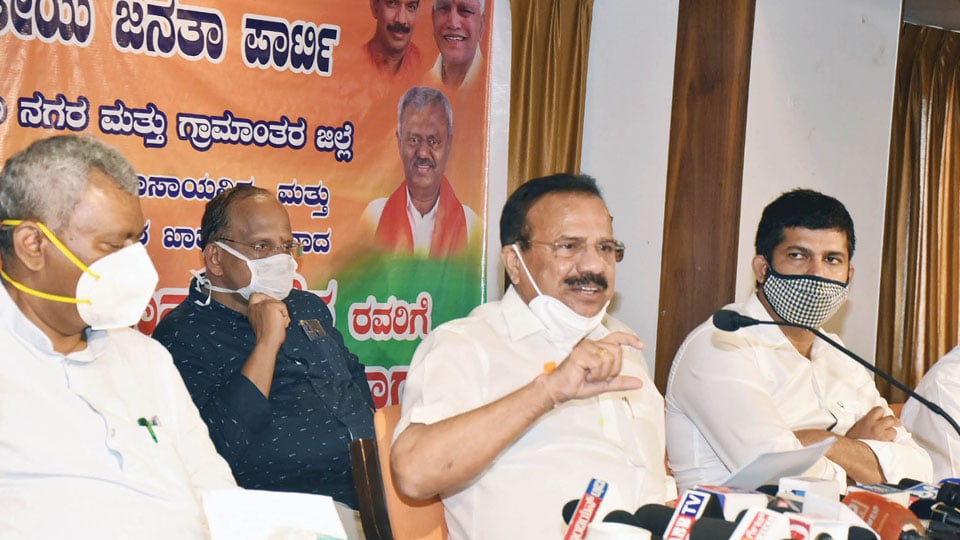 Mysore/Mysuru: Strongly defending the farm Bills introduced by the Centre, Union Minister for Chemicals and Fertilizers D.V. Sadanandagowda maintained that the Bills were aimed at doubling income of the farmers and bringing reforms in the farming sector.

The Union Minister, who arrived in the city this morning to take part in Sarada Vilas College Platinum Jubilee celebrations, was addressing a press meet at a Hotel on M.G. Road.

Pointing out that the three Bills introduced in 2020 — Bill on Agri Marketing, Bill on Contract Farming and the Bill relating to Essential Commodities — are revolutionary in respect of farming  sector, DVS lashed out at the Congress for creating unnecessary confusion among farming community.

Contending that the Union Government led by Prime Minister Modi is a corruption-free Government, he said that the Centre is ready to talk to farmers, free of any political affiliations, if they are willing to come up with their own viable suggestions.

Explaining the salient features, the Union Minister said that the Bill on Agri Marketing aims at creating an ecosystem where farmers and traders enjoy the freedom to sell and purchase farm produce outside registered Mandis under the States’ APMCs, to promote barrier free inter-State and Intra-State trade of farmers produce and to reduce marketing/transportation costs and help farmers in getting better price.

The Bill on Contract farming enables farmers to enter into a contract with agri-business firms, processors, wholesalers, exporters or large retailers for sale of future farming produce at a pre-agreed price. It also helps marginal and small farmers with land less than five hectares to gain via aggregation and contract.

The Bill on Essential Commodities seeks to remove commodities like cereals, pulses, oilseeds, onion and potatoes from the list of essential commodities. It also provides for attracting private sector/FDI into farm sector as it will remove fears of private investors of excessive regulatory interference in business operations, the Minister maintained.

Sadanandagowda further said that the Centre will launch campaigns to completely dispel all unnecessary fears among the farmers regarding the new Farm Bills.