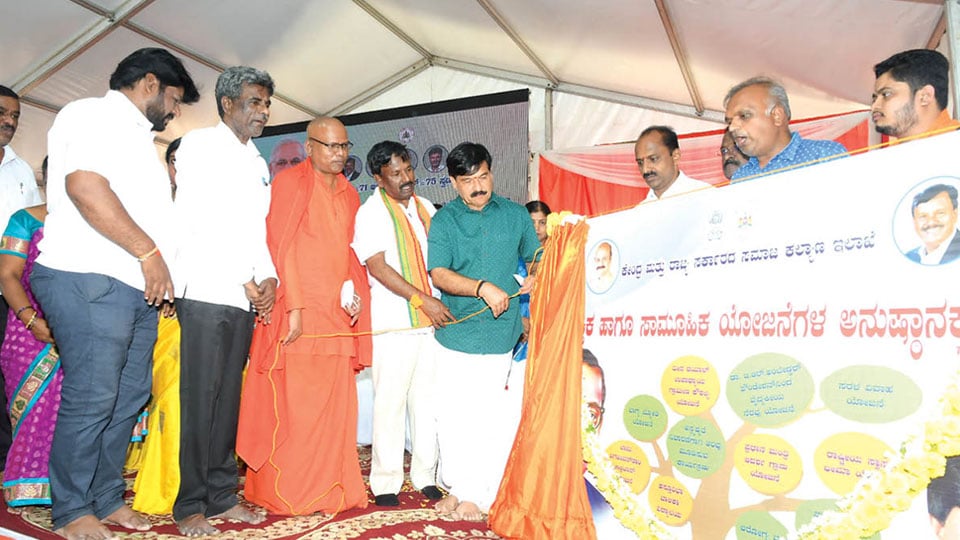 Union Minister expresses disappointment over functioning of Slum Board

Mysore/Mysuru: Expressing disappointment over the functioning of Karnataka Slum Development Board, Union Minister of State for Social Justice and Empowerment A.Narayanaswamy stressed on the need for officials to realise their responsibilities and work hard for the welfare of common man.

He was speaking at the launch of implementation of  various Government schemes and programmes organised by K.R. Unit of BJP as part of ‘Modi Yug Utsav’ at the park near Ramalingeshwara temple in Vidyaranyapuram here yesterday.

Regretting that there are many examples where people living in a single house for decades have not got title deeds, which is an important house ownership document, Narayanaswamy said that the Slum Board must consider this issue seriously and take measures for distributing ownership records to poor families for whom houses are built by the Government.

He pointed out that Prime Minister Narendra Modi, who has taken note of this, has launched ‘Swamitwa Scheme’ under which the beneficiaries of various housing schemes will get title deeds.

Lauding K.R. MLA S.A. Ramdas for taking Government schemes and programmes to the doorsteps of the people, the Union Minister noted that such door delivery of Government schemes to beneficiaries can hardly be seen elsewhere  in the country.

Social Welfare and Backward Classes Welfare Minister Kota Srinivas Poojari said that the Department is working on sending a message of equality and harmony to the masses by taking the help of all religious Centres.

Asserting that funds reserved for development of SC/ST communities will not be allowed for misuse or misappropriation for any reason, Poojari maintained that all funds will be utilised for reaching the benefits to targeted beneficiaries of various Government schemes.

Stressing on the need for bringing about a transformation in the working of his Department, Poojari wanted the officials to work with determination and dedication that can result in                           more efficacy.

Poojari further said that MLA Ramdas is a model for others in respect of how both Central and State Government schemes, plans, projects and programmes can be reached to even the last person in the society.

MLA S.A.Ramdas, in his address, said that measures have been taken for development of eight slums coming under his K.R. Constituency. Also, construction of a concrete road at Ashokapuram at a cost of Rs.4 crore has been taken up and programmes that benefit about six thousand people from SC/ST communities have been launched, he added.