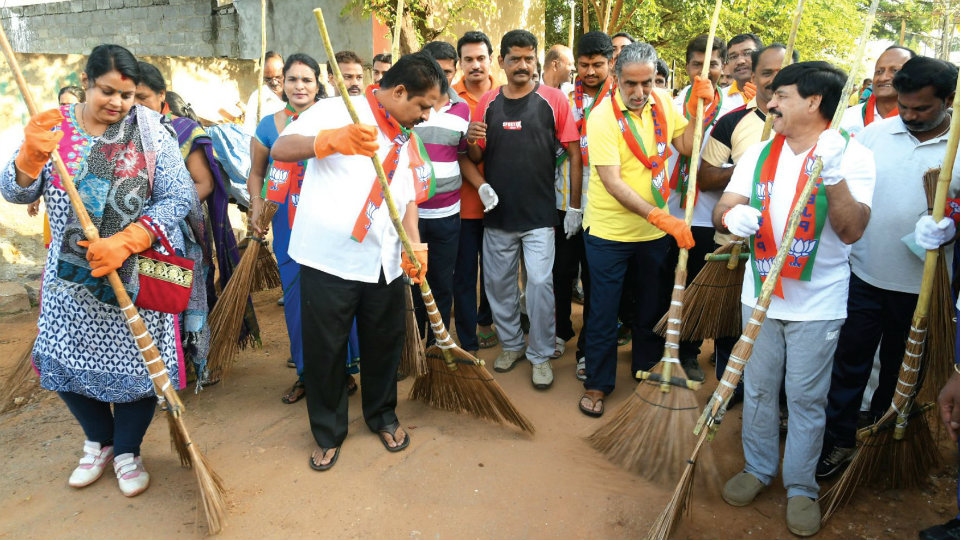 Mysuru: Union Minister of State for Social Justice and Empowerment Krishan Pal Gurjar, who is in city to popularise the achievements of the Centre, visited the Excel Plant near Sewage Farm in city yesterday.

The MCC officials told the Minister that the city generated 402 tonnes of solid waste everyday out of which the Plant processed 150 tonnes daily and the rest 250 tonnes were dumped in open space. This has resulted in 7.5 lakh tonnes of waste lying at the open space of the Plant over the years, they said.

The Minister, after being apprised about the working of the Plant, asked the officials to come up with a DPR (Detailed Project Report) on enhancing the capacity and more effective ways of processing waste. Once the DPR is submitted, the Centre will study it and release funds under Swachh Bharat campaign.

Pointing out that latest technology has revealed that power can be generated from wastes, Gurjar said that the Centre was willing to extend all necessary help in this regard if the State Government comes up with a proposal for the same.

Earlier in the day, the Minister as part of Swachh Bharat campaign, visited D. Devaraj Urs Pourakarmika Colony, where he planted saplings at a park.

The Union Minister was felicitated by the Colony residents near Pattaladamma Temple in the Colony. Speaking after being feted, the Minister highlighted the role of Pourakarmikas in keeping the city clean.

Complimenting the work of Pourakarmikas, the Minister regretted that Mysuru city, which earned the ‘Cleanest city’ tag for two successive years, had slipped to fifth position this time.

Explaining the objectives of Prime Minister Narendra Modi’s ‘Swachh Bharat’ initiative, he called upon the people to extend their whole-hearted support to the campaign and make it a                      huge success. Former Minister S.A. Ramdas, Corporators B.V. Manjunath, Jagadish and Seema Prasad, leader H.V. Rajeev and others were present.