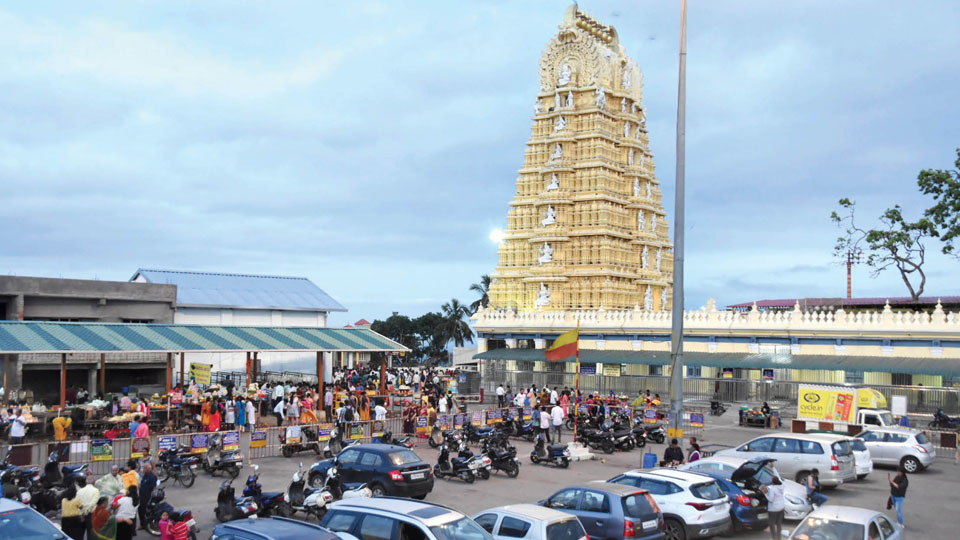 Mysore/Mysuru: Thousands of devotees thronged Chamundi Hill yesterday and there was bumper-to-bumper traffic for long stretches till evening. Vehicles ascended the Hill from early in the morning and the lucky few got space in the multi-level parking lot and those vehicles that came after 11 am were stranded on the roads.

The situation improved only after 6 pm when many started clearing their vehicles from the parking lot. The weekends and festival season usually sees extra rush. But yesterday, thanks to cool weather and clear skies, many decided to go to the Sri Chamundeshwari Temple atop the Chamundi Hill.

This resulted in traffic snarls from the View Point where people had to patiently wait for the vehicles to move. As the multi-level parking that can accommodate over 800 vehicles became full in no time, parking was allowed in Devikere premises. Soon, this place too became full and many were forced to park their vehicles by the side of the road and walk towards the Temple.

On a normal day, it takes just a few minutes to reach the Temple parking gate from the View Point. But yesterday it took more than 30 minutes to traverse the same distance. The Police and the guards appointed by the Temple Management Committee had a tough time in regulating the traffic.

Further, as there was heavy rush inside the Temple it took hours for the vehicles to clear from the parking lot as the devotees had to finish their Darshan and then come out to take their vehicles. Yesterday, more than 15,000 people visited the Temple and the overall collection from the special entry tickets stood at Rs. 7,05,090. In addition, there were long-winding queues in the free Darshan routes.

Traffic began clearing only in the evening and the situation was under control after 6 pm. There was an unusual rush in the morning as people usually prefer their first visit to the Temple before heading out to other tourist attractions in Mysuru. But yesterday’s situation was special as there was a day-long rush at the Temple.

As darkness descended, many vehicles stopped by at the View Point to capture the beauty of the ever-expanding Mysuru. Many recollected the visuals of Dasara lightings. Last night’s visuals were not as special as during Dasara but they enthused the crowd who rejoiced on the view point platforms, clicking selfies.