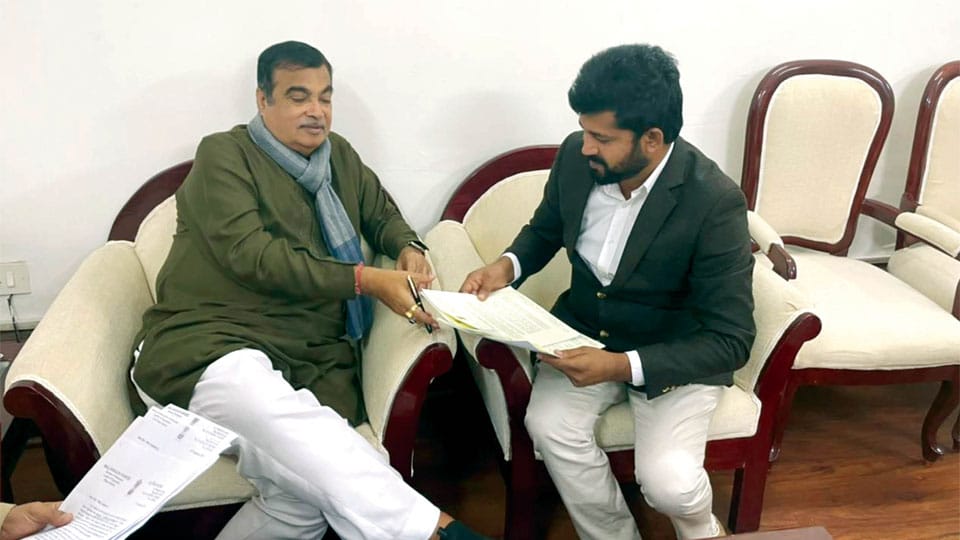 Mysore/Mysuru: Mysuru-Kodagu MP Pratap Simha met Union Minister of Road Transport and Highways Nitin Gadkari in New Delhi yesterday and appealed to him to upgrade the State Highway connecting Channarayapatna in Hassan district and Makutta on the Karnataka-Kerala border to a National Highway (NH).

The road passes through Channarayapatna, Holenarasipura, Arkalgud, Shanivarsanthe, Kodlipet, Somwarpet, Madikeri and Virajpet to reach Makutta via the Perumbadi check post to reach Kannur in Kerala. The NH will extend up to 183 kilometres and Rs. 1,600 crore funding is necessary to upgrade the existing road.

He said the road provides connectivity to various tourist destinations including Madikeri, Talacauvery and Bhagamandala. Development of the highway would also ease the connectivity to Kannur International Airport from Kodagu and Hassan districts.

According to a press release issued by the MP, the Union Minister responded to the demand positively and he said he would give suitable directions to the officers for in-principle approval. Development of this corridor will establish good connectivity between Madikeri and Kerala which will eventually bring tourists to Kodagu and also to Hassan.

The MP said that the alignment plan was submitted in 2018 and pointed out to the Minister that the movement of freight from Kodagu to other regions was affected and this had affected the economy of Kodagu.

The MP claimed that the condition of the existing road is poor and that it would extend travel time. The road infrastructure development is not in proportional with the traffic growth along this corridor which causes bottlenecks and resulting in delays, he said. Improving the corridor can reduce the travel time by at least 30 to 40 minutes when compared to the travel time taken at present, he added.

READ ALSO  Dumping your trash slyly on Ring Road?: 75 CCTV cameras to watch you, catch you

MP Pratap Simha has urged the Union Minister to convert the existing road into a four-lane stretch from Yedegowdanahalli to Bilikere for the smooth travel of hundreds of people who commute between Mysuru and Hassan.

He urged the Minister to modify the existing road to convert it into a four-lane stretch from Yedegowdanahalli to Bilikere for ease of travel and uniformity of roads. “The existing road is not in conformity with the traffic density and if converted to a four-lane stretch, would provide better connectivity to places of tourist importance besides ensuring safety,” he said.

The vehicular density of the current road is 11,000 PCU (Passenger Car Unit) and warranted an upgradation, the MP reasoned.